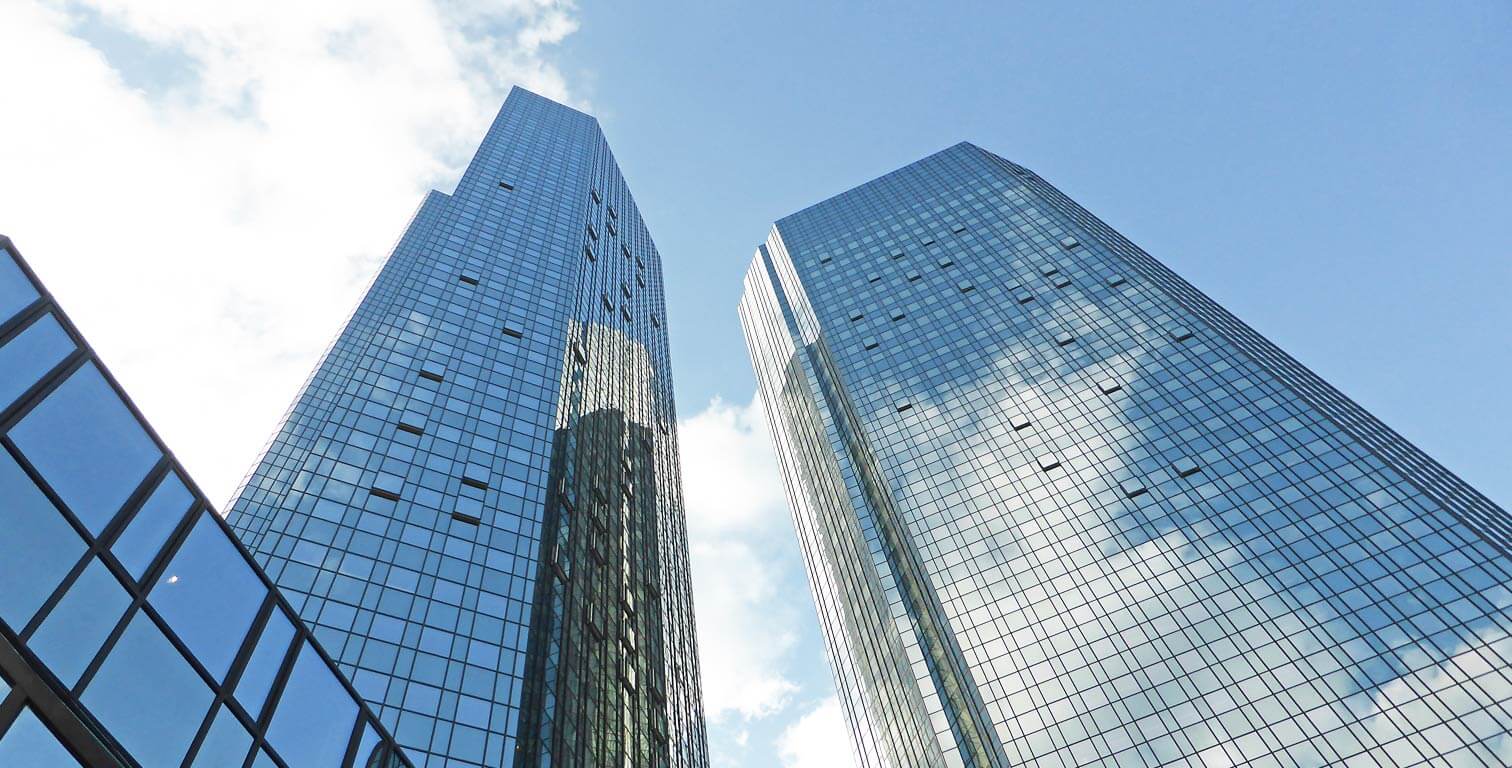 Deutsche Bank‘s twin towers were originally built between 1979 and 1984, based on the designs of the architects Walter Hanig, Heinz Scheid and Johannes Schmidt. In 2011 the banking complex was stripped down to the supporting structure and extensively modernized under the management of Bellini (design) and Gerkan, Marg and Partner (technology) under the working title Green Towers.

The Deutsche Bank headquarters consists of three parts: a four-storey pedestal building and the two high-rise towers. The building complex is based on a complete reinforced concrete construction with superimposed, mirrored glass façades. The building complex was commissioned by Josef Buchmann, and was originally planned as a hotel for the American chain Hyatt. When the two skyscrapers were taken over by the Deutsche Bank, they were already under construction.

During the modernization in 2011, the focus was on sustainability. Compared to the original twin towers of the first generation, the “Greentowers” require around 67 percent less heating and cooling energy after the renovation. Thanks to intelligent control systems and green IT (central printer pools, energy-saving screens, etc.), electricity consumption is reduced by 55 percent compared to the original usage. An almost one hundred percent recycling rate and the considerable energy savings make the two towers almost CO2-neutral high-rise buildings. The building technology of the Green Towers comes from Siemens Smart Infrastructure.

In contrast to the adjacent Trianon building, the base of the Deutsche Bank high-rise is not well-adapted to urban development. The mirrored base is lower than its neighbouring building, but spreads over a larger floor area.

From the center of the complex (between the two towers), three components extend to the east, south-west and north-west, on an irregular ground plan. In both horizontal and vertical directions, the base construction has numerous 45 ° angles. The two towers also have the same ground plan with many 45 ° angles and are arranged symmetrically around the center at a distance of 13 meters.

The twin towers are located near Alte Oper (the Old Opera House) and were once called “Soll und Haben” by some (“Soll und Haben” are the activa and passiva of a balance sheet). The towers lie in the Financial District of Frankfurt at the beginning of  Mainzer Landstrasse, as well as at the border of the Westend district, the city center and the central station.

Directly at the main entrance of the Deutsche Bank complex are entrances to the underground S-Bahnhof Taunusanlage (a lightrail system). In the south and east, the Wallanlagen are located, from which there are outstanding views of the building. In the west, the high-rise axis of Mainzer Landstrasse follows (the Trianon skyscraper, Frankfurter Büro Center and Westend 1). The twin towers have become a popular backdrop in print media and on television as a symbol of the German economy. The distinctive double towers also contributed to the role of Deutsche Bank as the core element of the close interdependence of large German conglomerates, which is known as Deutschland AG.

You can now download the Deutsche Bank crafting model. The twin skyscraper is part of the cut-out sheet series ARCHITECTURE with sauce, which is aimed at children and adults. The implementation of the handicraft template was made possible by SKYLINE ATLAS.

Status 2006: Until 2010, Deutsche Bank AG used the IBC Tower as alternative accommodation during the renovation work of the twin towers.

As of 1984: The headquarters of Deutsche Bank is currently being built.