Aerial View of the Kaiserlei Area 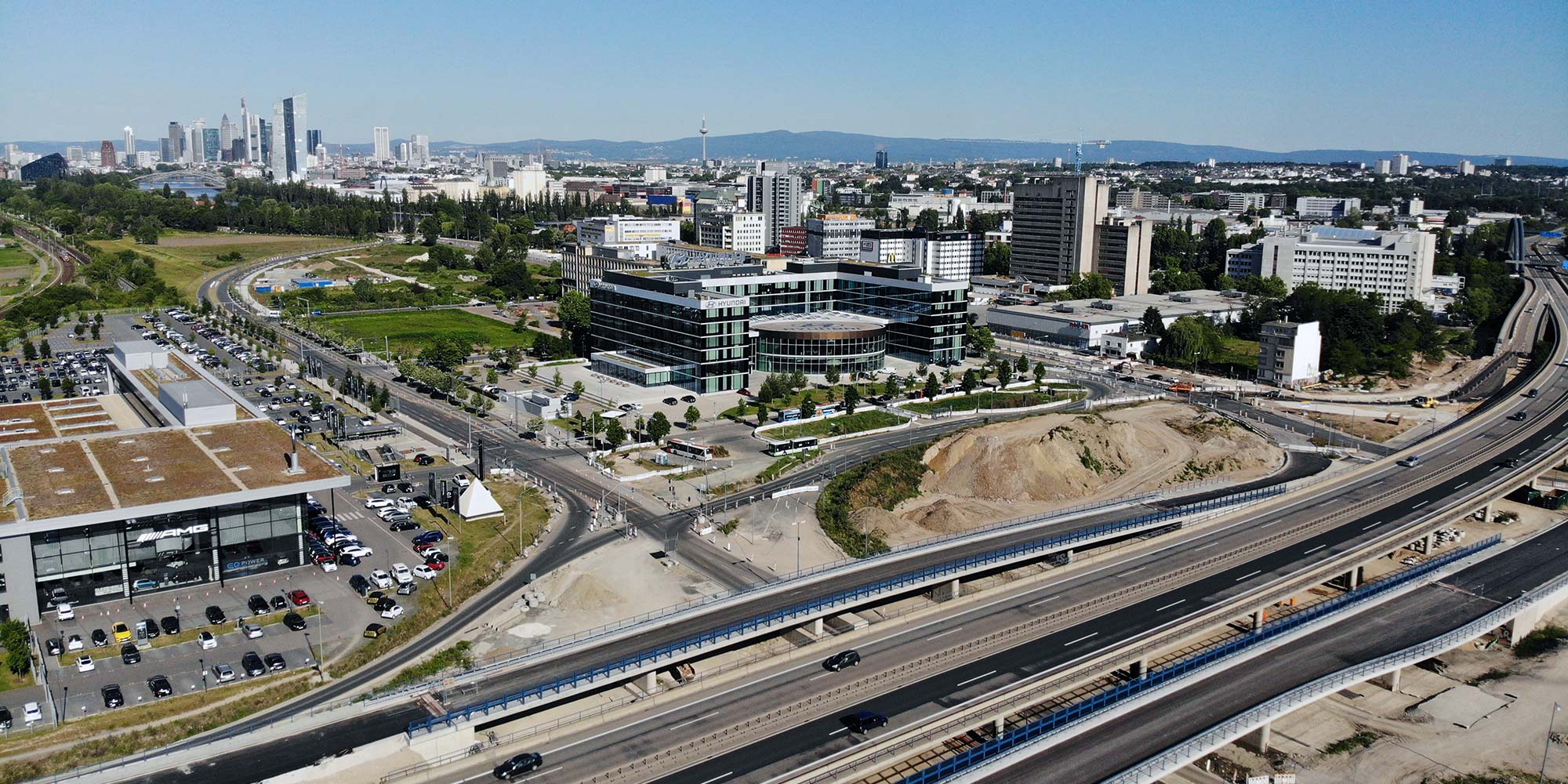 The aerial photo was taken in summer 2020 and shows the view of the Kaiserlei in the direction of Frankfurt city center.

Due to the progressive developments, the cities Offenbach and Frankfurt form an almost contiguous settlement area here. In the north the Kaiserlei is bounded by the Main river, on the opposite river side lies the Frankfurt-Ostend district and the Frankfurt East Hardbor (Frankfurt Osthafen), in the west and southwest the Kaiserlei is in direct proximity to district Frankfurt-Oberrad and in the south it borders to Offenbach-Westend. The districts Offenbach Harbor (Hafen Offenbach) and North End (Nordend) lie to the east of Kaiserlei.

For this reason, some real estate developments in the Kaiserlei area do not reside on Offenbach grounds. For example, the new Mercedes-Benz Frankfurt-Offenbach Branch is located on city area of Frankfurt, but the Hyundia German Headquarters belongs to Offenbach. The city limits run on the southern sidewalk along the Kaiserleipromenade street.

The Offenbach-Kaiserlei freeway junction leads into the busy street Strahlberger Strasse. From here you can reach Offenbach city center in easter direction via Berliner Strasse. The Kaiserlei S-Bahn station (commuter train) is located directly at this roundabout and thus offers easy access to the area via various S-Bahn lines.

Development of the Kaiserlei Area

In 2004 the cities of Offenbach and Frankfurt reached an agreement on the joint development of areas of both municipalities, which border one another here, and thus made it possible to expand the commercially usable area. The revised master plan for the Kaiserlei area comprises three sub-areas. Of these, the commercial quarters Am Grenzgraben and Kaiserlei-Promenade are belonging to Frankfurt and cover 23 hectares.

A special development focus of the Kaiserlei area are currently also data centers. With Maincubes and Main DC there are now two new data centers that are being built here directly next to the headquarters of the local electricity company Energieversorgung Offenbach (EVO). This development makes especially sense if you take into account the close proximity to the EVO Headquarters and DE-CIX. The world’s largest internet hub, DE-CIX, is on the north side of the Main river – just a few hundred meters as the crow flies from the Kaiserlei.

The Kaiserlei area is primarily characterized by the settled finance and service companies. So far, the appearance has determined functional office and commercial buildings in the style of the 1970s and 1980s.

Since the year 2000, more and more buildings have been built that are based on the style of postmodernism. Examples are the Omega House (Omega-Haus) and the AlphaHouse (AlphaHaus). Existing plans provide for a similar development for the New Kaiserlei (Neuer Kaiserlei) area.

Various real estate projects are currently being redeveloped in the Kaiserlei. For example, the former Siemens High-Rises will be converted into modern residential towers under the name Vitopia Campus by 2024. And recently the Goethe Quarter (Goethequartier) was completed on a former fallow area to create space for hundreds of new apartments. In addition, the former headquarters of the German Weather Service (Deutscher Wetter Dienst) is being converted into a boarding house called The X. Not far from there, the LEIQ project is an innovative office building not far from the Main river.

A number of new high-rise locations are currently being prepared for tendering or specifically planned in the Kaiserlei region. With the Nordkap Tower, a 110 meters (361 feet) high office tower is to be built in the northern area. A development plan procedure is currently (November 2020) running for this planned high-rise project. In order to ensure the quality of urban development and design, renowned architects from Germany have drafted design concepts as part of a so-called multiple commissioning. The submitted designs illustrate how the high-rise looks like and how it could be connected with the surrounding urban space. The concepts are to be presented in the near future.

Further high-rise locations are currently being prepared on both sides of the A 661 freeway. According to reports, numerous interested parties have already shown an interest in it. A total of up to four higher skyscrapers are to be built in the Kaiserlei – with a height of 75 to 110 meters. Of these, the two high-rise projects directly on the motorway are the furthest planned. The City of Offenbach is currently preparing the tender of the development of land which it fully owns, according to Offenbach’s Lord Mayor Dr. Felix Schwenke. The bidding process for these new high-rise locations is to start in the first half of 2021, if possible.

In addition to the four planned real estate locations for high-rise towers, high points can also arise in the perimeter block development of the planned building areas between Strahlbergerstrasse and Kaiserleipromenade. In total, up to five additional high-rise buildings with a height of up to 45 meters (148 feet) could be built. This is what the Kaiserlei investment plan submitted by the City of Offenbach provides (as of July 2020).

The Kaiserlei area is particularly affected by aircraft noise. Offenbach as a whole is considered to be the municipality with the highest daily exposure to aircraft movements around Frankfurt Airport. As a result, the whole quarter is subject to the Law on Protection Against Aircraft Noise, which results in settlement restrictions. Hospitals, retirement homes and rest homes, as well as schools, kindergartens, and similar facilities that require the same degree of protection, are not allowed to be built in Kaiserlei. The same applies to the identification of new residential areas that have not previously been marked as construction areas. This applies in particular to the areas west of the A 661.

The area around the Kaiserlei was a traditional border area as early as the early Middle Ages. The so-called Grenzgraben (lit. “Border Dig“) still runs here today. The moat forms a territorial border that is more than 1000 years old. During the Carolingian era, the border separated the Main Gau from the Rhenish Gau, later the Free Imperial City of Frankfurt from the County of Isenburg, and around 100 years ago there was a state border between Prussia and Hesse. Today the city border between Frankfurt and Offenbach runs along the Grenzgraben – but today both cities belong to the same federal state (namely Hesse). 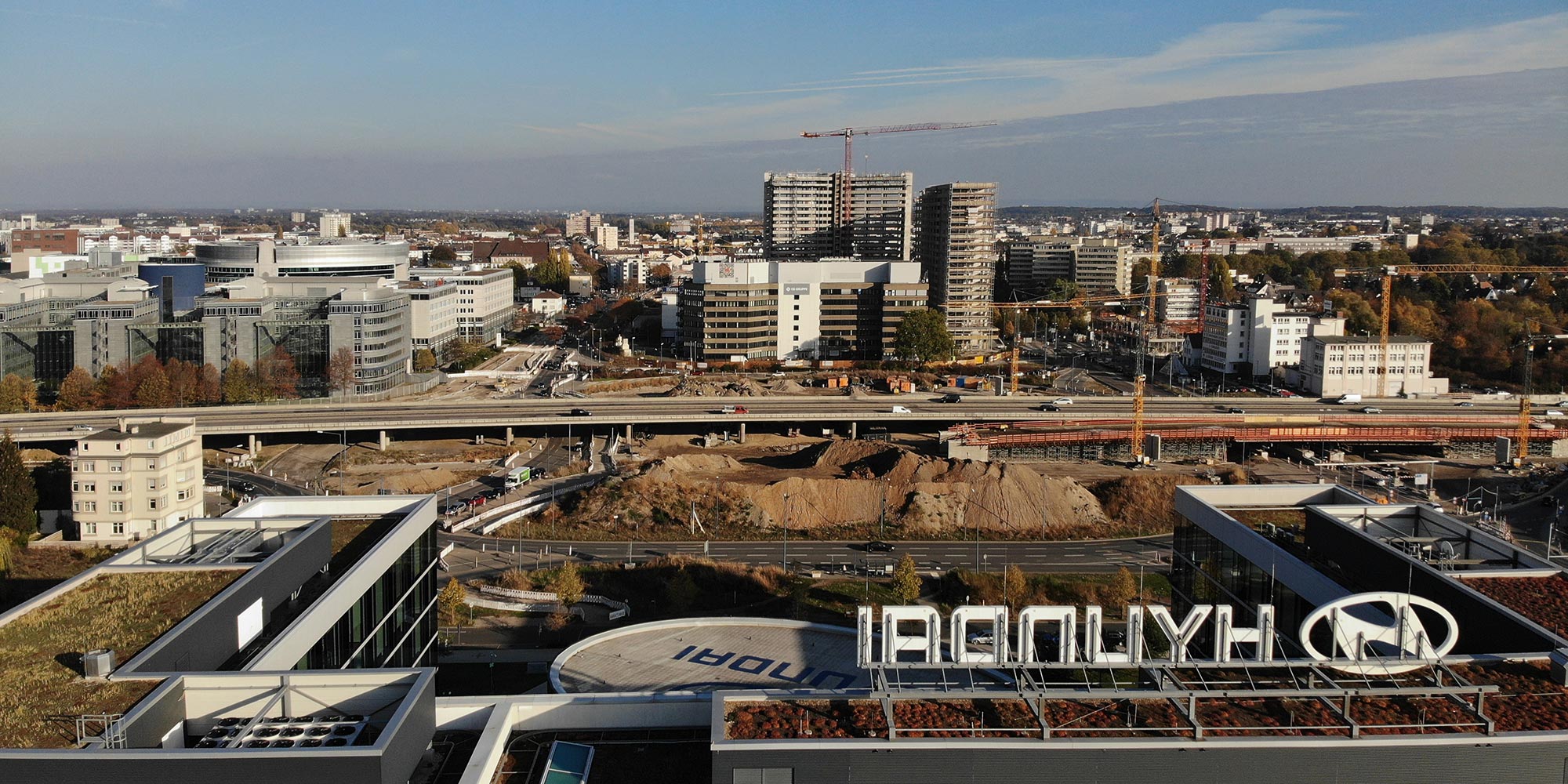 This Offenbach panorama was created in summer 2019 and shows the view towards Offenbach city center. It was carried out by a Offenbach drone pilot.

Offenbach has a total of 21 districts. New high-rise buildings are not only planned in the Kaiserlei, but also in Offenbach Harbor (Offenbacher Hafen). Wayv Offenbach and Die Macherei Offenbach are to be built there in the coming years.