Why are there high-rise buildings in Frankfurt?

Frankfurt has always been a comparatively compact city. For example, Frankfurt today has about half the area of Venice in Italy, with three times the population (about 750,000 people without the suburbs in Frankfurt’s urban area). In Frankfurt, therefore, construction has always been dense. In addition, the city area is now confined by a massive green belt around Frankfurt that limits outward sprawl. Additionally, no apartments may be built along the flight paths to and from the airport. Because of this self-imposed “island location”, space for development is limited.

Frankfurt owes its development to the Main river. It has always been possible to cross the river through shallow waters (“Furt“ in German) without a bridge. The “Furt on the Main” has grown continuously since Roman times. Frankfurt was a good place to live and an international trading center. Therefore, a wealthy clientele has always been there and land has been valuable. It was easy to get to Frankfurt, but more important for some people: easy to leave.

Not a typically German Place

Frankfurt’s population has traditionally come from elsewhere, and it’s still true today. More than 50 percent of Frankfurt’s residents do not have a German passport or have a history of migration. As Lord Mayor Peter Feldmann once put it: “More than half of Frankfurters have no German roots. And the other half came from somewhere at some point in time.” Frankfurt is therefore more cosmopolitan and tolerant than the rest of Germany. Perhaps this is also one of the reasons why there is greater openness in politics to urban development compared to other cities.

The picture shows the historic Old Town with its medieval buildings and winding streets in 1941.

Up to a hundred years ago, Frankfurt’s Old Town (Altstadt) with its winding streets was the pride of the city. The historic Old Town comprised 1,250 half-timbered houses, mostly from the Middle Ages, making it one of the largest half-timbered towns in Germany. In addition, the historic stone buildings had spacious exhibition courtyards, and the patriciate occupied medieval urban castles.

Visiting the Old Town with its cantilevered half-timbered houses has long fascinated visitors and locals alike. The dense historic Old Town was one of Germany’s main tourist attractions.

The photo shows Frankfurt’s Old Town, which was completely erased by World War II (the city model of the destroyed Frankfurt can be seen in the Historical Museum).

However, all medieval buildings were erased during the Second World War. Frankfurt’s city center was especially selected for firebombing on October 4, 1943 because the mass of wood in its buildings was higher than any other city, and the buildings were so densely packed. After the bombing, Frankfurters’ city pride almost died out. But locals’ nostalgia for their Old Town and its fame remained.

After World War II, in the 1950s and 1960s, the Old Town and New Town districts were quickly built over with easily erected buildings. Some striking buildings and town squares have been reconstructed in the old style, especially around the Old Town’s main square, the Römerberg. Until 1961, the Frankfurt Cathedral was the tallest building in the city.

Germany was divided after World War II. Due to the division, Berlin could no longer be Germany’s banking center. Many banks settled in Frankfurt, including Deutsche Bundesbank, and well-paid people came to the city.

In the post-war period, out of necessity, simple buildings were erected in the city center that were once supposed to stand for a modern Frankfurt. However, many of them overzealously exceeded the dimensions of their surrounding buildings. Frankfurt was looking for modernity and itself.

But instead of bringing progress, decades later the new buildings were considered unsightly. They ended up empty and disfigured the urban landscape. Frankfurt crept into an identity crisis. At some point there was nothing left to save. Unscrupulous investors took whatever was possible and – fueled by the boom in the post-war years – built ever higher buildings. Surprisingly, a public building, the university’s AfE Tower (completed in 1972), finally broke the 100-meter (328 feet) barrier. In the 1970s and 1980s, many other high-rise buildings followed. Such buildings were also constructed in historic residential areas which should have actually been protected. This process contributed to massive gentrification and protests. During this time, the city was given wicked nicknames that are no longer common today thanks to the adjustment of master plans and city planning.

In the 1990s, more architecturally sophisticated towers were built because there was no shortage of money. The ever denser Frankfurt skyline developed into the new symbol of the city and reflected its prosperity and future orientation. Frankfurt was finally able to love itself again. 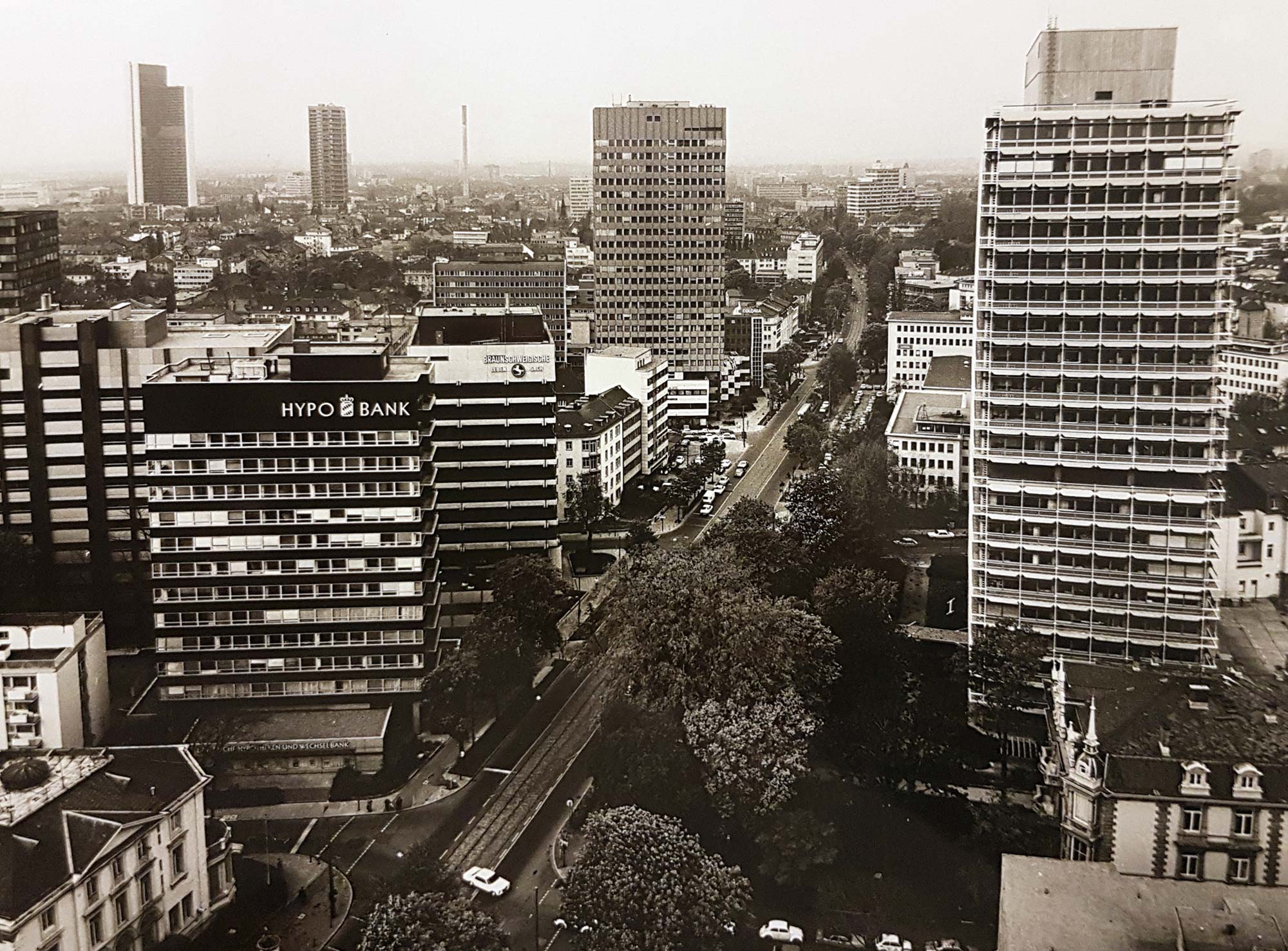 The picture shows Bockenheimer Landstrasse in 1976 and represents the change that the Westend district has undergone to this day. All the high-rise buildings visible in this picture no longer exist in this way: the properties were either demolished or converted.

Since 1998, the skyscraper master plan has regulated where and how high-rise buildings can be built. Today most of Frankfurt’s skyscrapers are bundled in the Financial District and the European Quarter. Attempts are currently being made to limit high-rise buildings to certain locations, which should create a cluster effect. This is why the skyline of Frankfurt looks so compact today: New high-rise locations are primarily allowed where there are gaps in the city panorama as viewed from a distance.

Frankfurt has always been centrally located in Germany. Important traffic routes intersect here. This accessibility established Frankfurt long ago as a site for international trade fairs.

Around half of Germany’s people live within a 200-kilometer radius around Frankfurt. And the eastward expansion of the European Union put Frankfurt suddenly near the geographic center of the EU.

Other political events promoted the rise of the high-rise city. European integration, the introduction of the euro, and Helmut Kohl’s (a former German chancellor) negotiating skills made Frankfurt the seat of the European Central Bank. This led to an influxe of thousands of well-paid specialists who could afford upscale homes.

From Blemish to Brand

The population increasingly identified with their chic skyscrapers, not least because more and more towers became accessible to the public. Since 1996, Frankfurt has even celebrated its skyline with the Skyscraper Festival at irregular intervals. Most unsightly towers in the city center were demolished or renovated and replaced by modern high-rise buildings.

Even after decades, many Frankfurters felt a deep longing for the stories and images of the Old Town lost in the war. And so it happened, as it had to happen: In memory of the historical buildings, a total of 35 buildings were erected in the New Old Town by 2018 and have since attracted locals and visitors alike.

Whether it’s urban developments or trendy urban districts in Frankfurt which provide space for living or working: The city is constantly attracting an increasing number of people and companies. Also international real estate investments have reached a record level, for several reasons – because the German metropolis:

So there is no doubt: Frankfurt is booming. And from an investor’s perspective, Frankfurt properties are cheap compared to London or Paris. The high-rise boom is not expected to end soon.

The British decision to leave the European Union unexpectedly opened another source of growth in Frankfurt. Numerous banks and service providers will create further well-paid jobs in the coming years. No one knows exactly how this will affect further urban development, but it is clear:

The growing skyline has become the symbol of Mainhattan. Frankfurt is Europe’s booming world city, the new “place to be”.

Growth and City Development
When will Frankfurt have a million inhabitants?

The real estate agent Dean Vukovic from V&V Immobilien is advising on investments in apartments and offices. In an interview with SKYLINE ATLAS, Mr. Vukovic talks about the challenges that real property investors face and the future development of the real estate market. He predicts that real estate prices will continue to rise in the economically strong regions of Germany.