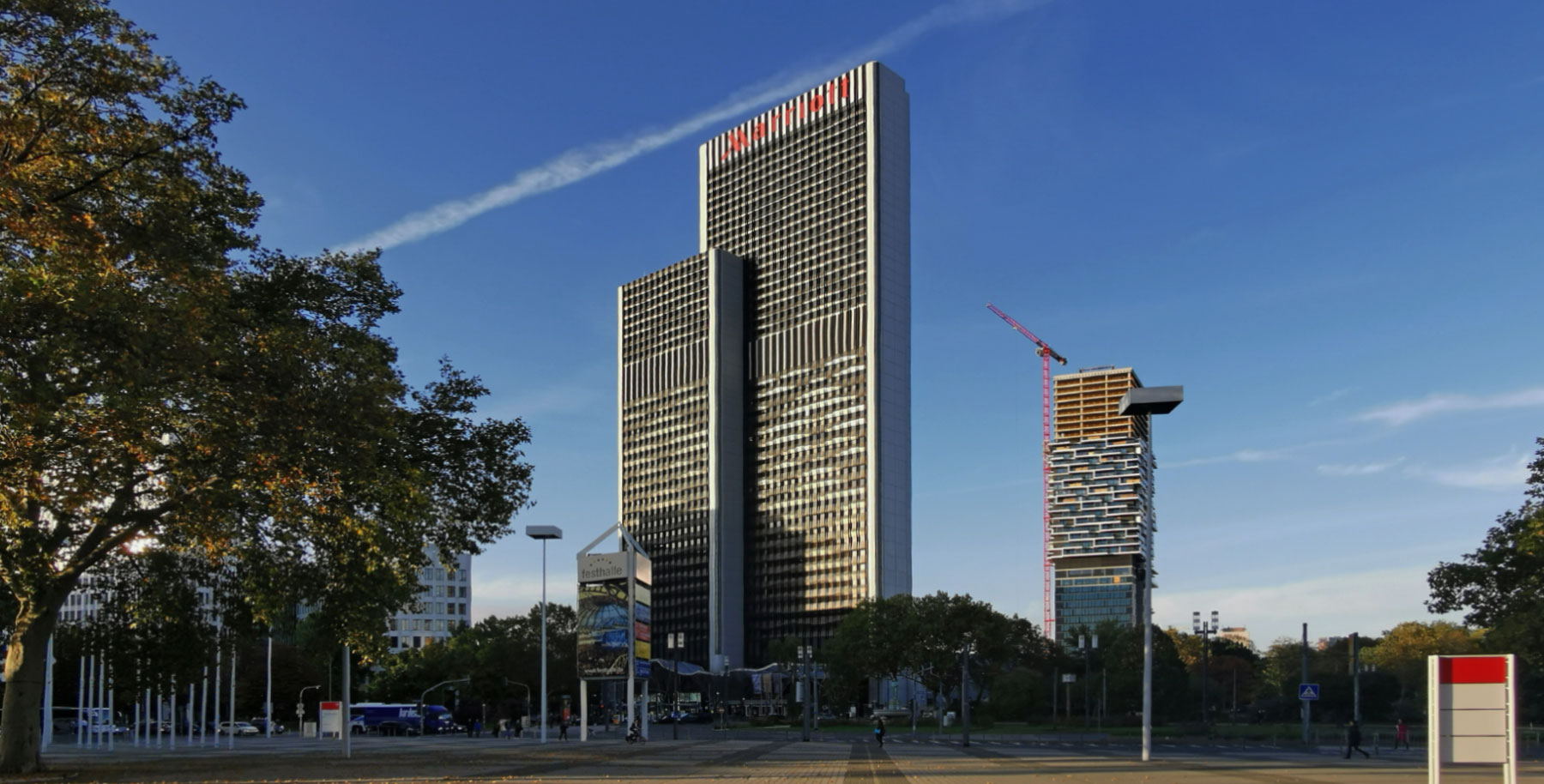 The Westend Gate (formerly known as PBC – the Plaza Büro Center) is an office and hotel high-rise on the border to the Westend. It is located on Hamburger Allee 2-4, opposite the main entrance of the Frankfurt Messe and the Maritim Hotel. MesseTurm is very close by. The 159-meter-tall Westend Gate has 47 floors, was built in 1976 and was totally renovated in the meanwhile. The leading architects were Siegfried Hoyer and Richard Heil. The usable area of ​​the building is 55,400 square meters.

After its opening, it was for a short time the tallest high-rise building in Germany, and at the same time, the first skyscraper in the country. It consists of an office tract, which was marketed as the Plaza Büro Center (lit. “Plaza Office Center“), and a hotel tract, which was once run as the Plaza Hotel. The hotel group Marriott moved into the building in 1989, and today occupies the area next to the reception on the ground floor, the ball hall on the first floor, the conference day on the fifth floor and floors 26 to 44.

In the 1990s, the entrance area was postmodern with a large glass dome and further extensions, which did not fit architecturally into the overall picture. Between October 2008 and March 2009, the building was extensively renovated and the annexes removed. Under the new name Westend Gate, the office space has been available since the second quarter of 2009.

From 1988 to February 2012, the building belonged to DEGI, an open-ended real estate fund. From 1998 to 2007, DEGI was a subsidiary of Dresdner Bank. Today, it belongs to the Swedish Aberdeen Property Investors Holding from Stockholm, which in turn belongs to British Aberdeen Asset Management. In March 2012, RFR Holding and co-investor Stenham Property acquired the Westend Gate.

Since September 2016 the Aparthotel Adagio Frankfurt City Messe, specialised in long-term stays, and has occupied the floors 4 to 10 of the Westend Gate with 172 apartments.

Next to Westend Gate, the Senckenberg Quarter will be built by 2022 consisting of the ONE FORTY WEST and Senckenberg Turm high-rise buildings.