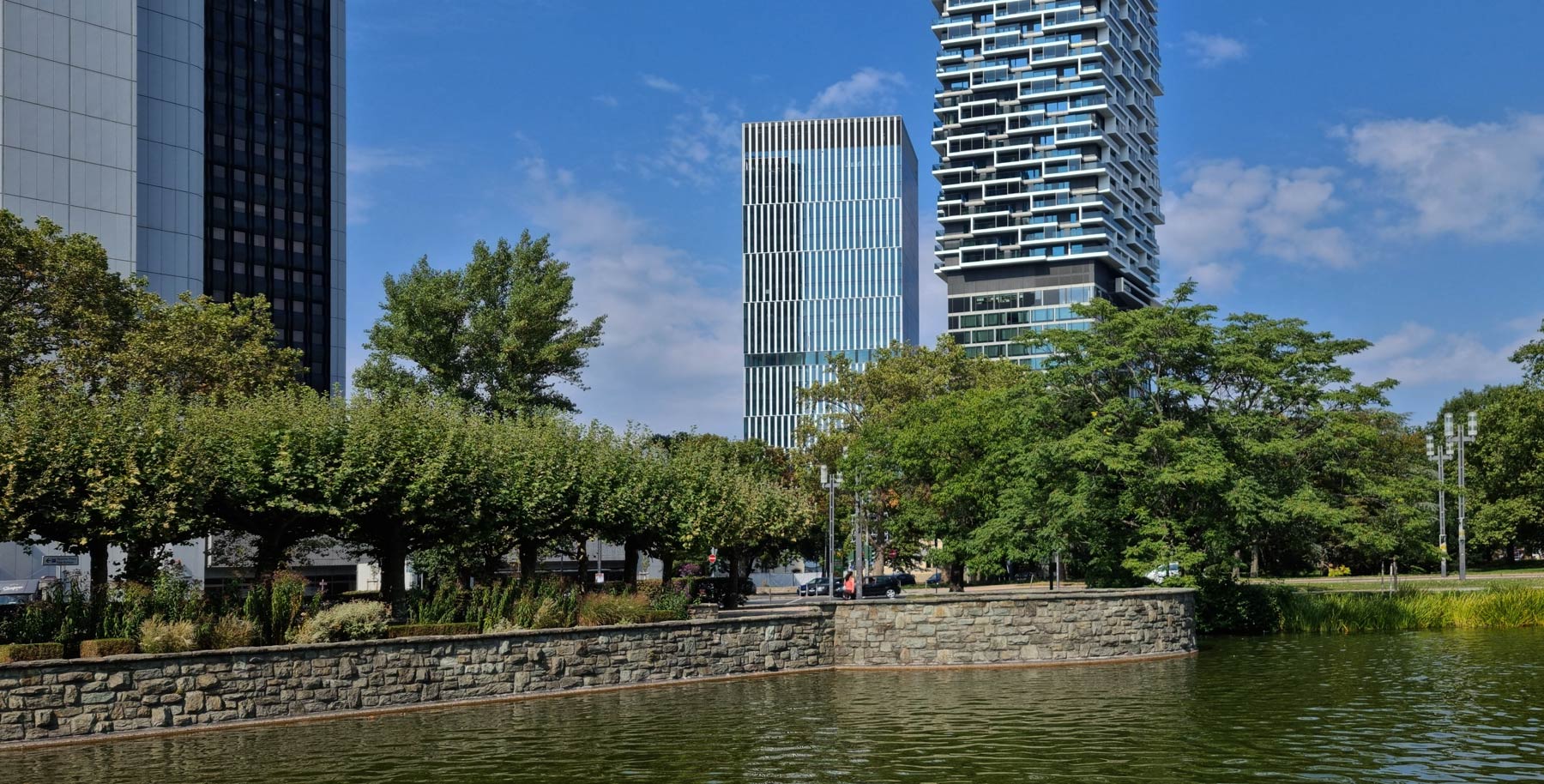 On the site of the former AfE Tower at Senckenberganlage, a 106-meter (348 feet) office tower called Senckenberg-Turm (lit. “Senckenberg Tower“) was completed in early 2022. For this, the project developer Groß & Partner had issued an architectural competition from which a winner was chosen at the end of September 2017. The winner of the architectural competition was cyrus moser architekten (cma), who also designed the adjacent tower, ONE FORTY WEST. Groß & Partner has sold the project development in the meanwhilte to BNP Paribas Real Estate. Until September 2020, the Senckenberg-Turm was known under the working titles NINTY NINE WEST, 99 WEST, and Hochhaus am Kulturcampus (lit. “High-Rise at the Cultural Campus“).

The client invested a total amount of around 265 million euros in the Senckenberg-Turm project. The office building is built with sustainability in mind: a BREEAM certification is aimed to be achieved.

The French major bank BNP Paribas moves with its German headquarters into the first thirteen floors. The office tower is thus pre-let with around 60 percent of the space before completion. A gastronomic offer is planned on the ground floor of Senckenberg-Turm Frankfurt.

“The concept of cma convinced us because it is particularly well suited to ensemble ideas, which is especially important to the residential area of Bockenheim. The differentiation of the pedestal area and the successful connection to the day care centre were also rated very positively”, explains Jürgen Gross, managing partner of Groß & Partner, who had the winning design. Second place in the competition was awarded to Frankfurt-based architecture office schneider+schumacher, while third place was taken by KSP Jürgen Engel Architekten also from Frankfurt.

In their last meeting before the municipal elections in 2016, the city council agreed on the development plan for the campus plan, which will be designed to function as a mixed-use district with housing, jobs and cultural facilities after the university moves.

The high-rise has now also been awarded the BREEAM Excellent sustainability certificate. 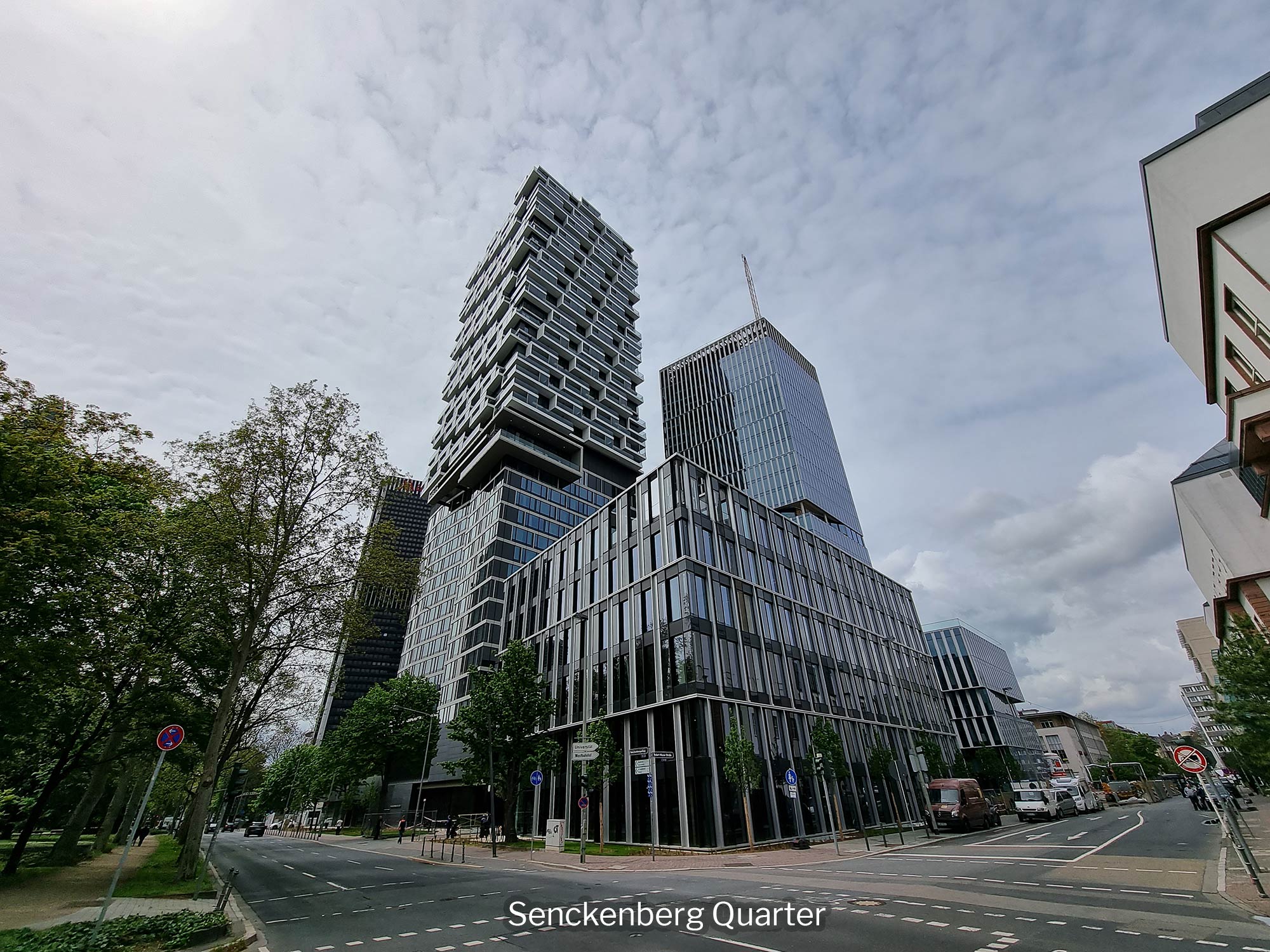 Status January 2022: After 2.5 years of construction, the Senckenberg Tower has been officially completed and handed over to the owner NAS Invest. In addition to the major tenant BNP Paribas, the accounting firm Warth & Klein Grant Thornton will rent 2,000 square meters of office space. This means that the occupancy rate is currently just under 70 percent. In addition, NAS Invest is currently negotiating with two other interested parties on the lease of a total of 5 floors.

Status February 2021: The construction manager shows the readers of the SKYLINE ATLAS the state of the site during a high-rise tour and explains details that are worth knowing.

Status September 2020: The high-rise 99 West has a new name and is now only called Senckenberg-Turm.