City East (in German: City Ost) is a mixed-use development area around Frankfurt’s East Station (Ostbahnhof), which is, like the Financial District, not formally precisely defined. City East is located in the Ostend (lit. “East End“) district at the intersection of an established residential development in the western part and a predominantly commercial part on the street Hanauer Landstrasse. The area around Hanauer Landstrasse has been undergoing a major change from an industrial area to a city district with perimeter block development for around two decades. In the middle of these two areas exists the City East as a link, in which several thousand people live.

The most striking building in City East is the skyscraper of the European Central Bank (ECB). The Light Tower is yet the only existing high-rise office building around the ECB. However, there are currently a number of other high-rise buildings under construction and in concrete planning, such as the towers of the Harbor Park Quarter (Hafenpark-Quartier) and the project Great East. City East was also discussed in 2020 as the location for the city’s new theater premises. 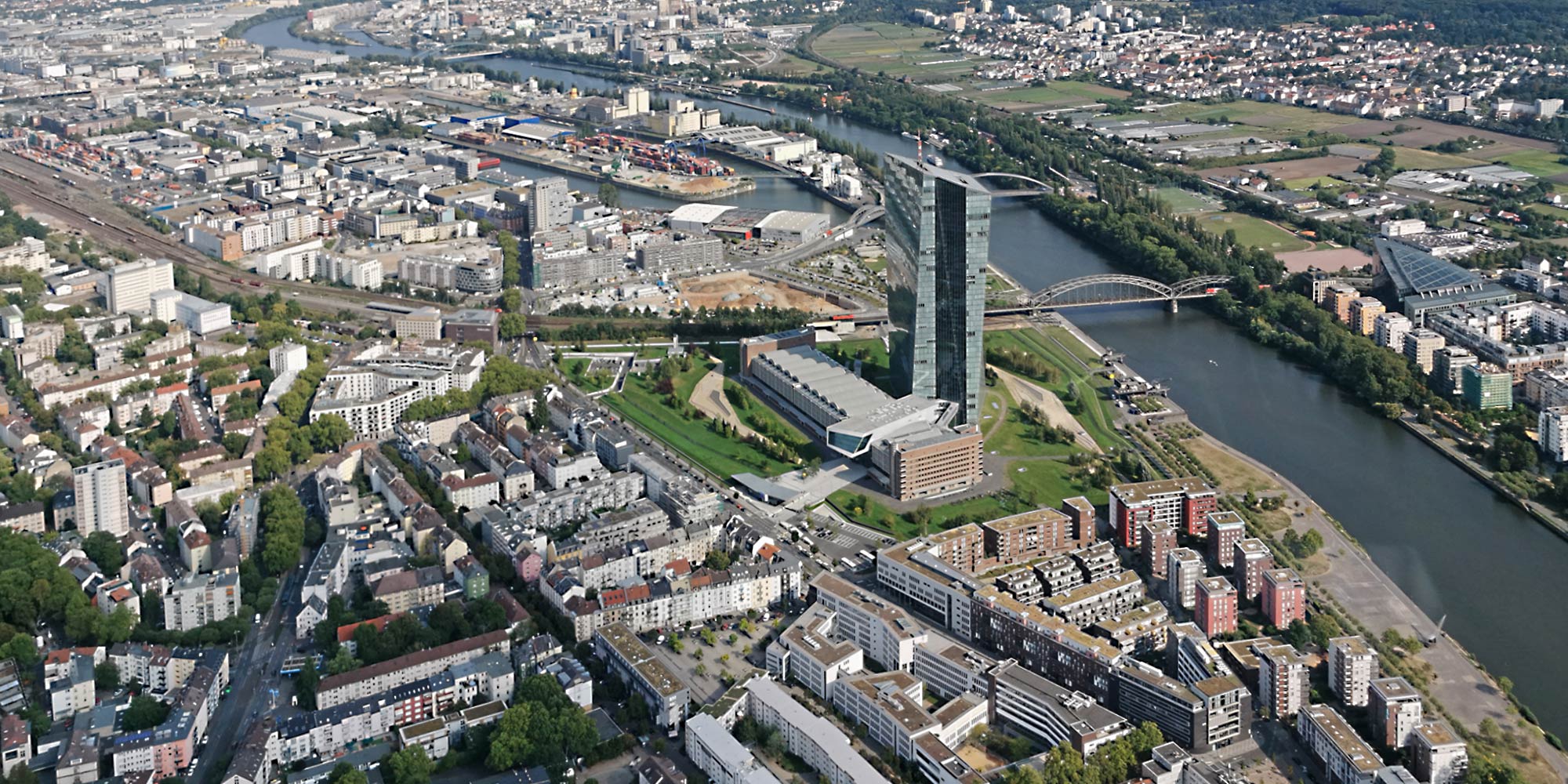 The aerial photo of City East was taken on a helicopter flight over Frankfurt.

City East Frankfurt is delimited in the western part approximately by the location of the ECB, in the north in the area of the streets Röderbergweg and Ostparkstrasse, in the east by parts of the lower Eastern Harbor Basin and in the south by the tip of the pier island (Molenkopf). From here, the East Harbor Bridge (Osthafenbrücke) built in 2011 also crosses over to the south side of the Main river.

City East is well connected by numerous modes of transport. In the East Station (Ostbahnhof) there has been a subway connection since 1999 and trams run on Sonnenmannstrasse and Hanauer Landstrasse. The Ostendstrasse S-Bahn station (regional trains) is only a few hundred meters away. Numerous bus connections are also available. By car you can get to the A 648 freeway via Hanauer Landstrasse in a few minutes.

In the 1990s, the area on Sonnemannstrasse and Hanauer Landstrasse was still characterized by industrial areas, commercial quarters and fallow land. Only north of Sonnemannstrasse was there an established residential development, which was used in particular by low-income sections of the population.

As a result of urban developments on Hanauer Landstrasse, the area migrated in the 2010s into an urban quarter with dense block perimeter development, gastronomic offerings, and nightlife options. The area on both sides of Hanauer Landstrasse up to Fechenheim is now also known as Eastside Frankfurt.

With the establishment of the European Central Bank in 2014, the east of Frankfurt received further development impulses. In the course of the establishment of the ECB, the Harbor Park (Hafenpark) was created and the northern bank of the Main river revived for the public. Numerous new buildings and renovations of existing buildings ensured that the Ostend became more and more popular for apartment seekers who could not find what they were looking for in other districts close to the center.

In November 2020, the City of Frankfurt commissioned two planning groups to investigate the implementation of further high-rise locations in the area of the ECB, East Harbor entrance, and Danziger Platz. The aim of the urban planning study is to shape Frankfurt’s City East into another high-rise cluster. Part of the planning is also to give the European Central Bank more development opportunities on its own property.