Using the Helicopter to fly to Burger King

The editorial team of SKYLINE ATLAS has known Frankfurt’s multiple facets for decades. Whether historical information, current events, or real estate trends: there is always something new about Frankfurt. Normally we report from the ground, except for the aerial drone shots of Frankfurt. So we asked ourselves: What does a helicopter flight over Frankfurt feel like? Our author Michael Wutzke gets on board, experiences Frankfurt from a new perspective, and learns what helicopters have to do with hamburgers.

Status February 2022: Unfortunately, the provider Helifliegen presented in this document has discontinued the service in 2022.

The Idea: Experience Frankfurt by Helicopter or Plane

A Google search for “frankfurt skyline tour” quickly reveals some providers of sightseeing flights over Frankfurt. There’s an abundance of choices: you can take to the skies by helicopter or plane.

An airplane sightseeing flight usually covers a longer distance and passes the skyline faster than a helicopter. Since our main interest is the city center of Frankfurt with its skyline of skyscrapers and towers, we decided on a skyline flight with a helicopter. This also lets you remain in a spot to take aerial and panoramic photos without moving too fast.

The Agony of Choice: Finding the Right Flight Operator

Hovering over the Frankfurt skyline in a helicopter sounds charming at first. But in the next moment you ask yourself which stranger you entrust your life with. So, is it best to book the cheapest helicopter ride you can find on Google, Jochen Schweizer, mydays, or Groupon? The choice is not that easy; not every helicopter flight is alike. Our requirements were clear:

We compared reports on some sightseeing flight providers. After a phone consultation we chose Helifliegen.de.

Choosing among online deals is risky, especially for sightseeing flights. Inexpensive flight deals often link to providers who only generate leads and do not conduct helicopter flights themselves. Some online mediators are also big gift-selling providers.

Helifliegen.de, on the other hand, operates its own tours. Located exclusively at the Frankfurt-Egelsbach airfield, Helifliegen.de has the experience and practice for take-offs and landings at Egelsbach (Germany’s largest private airfield). They perform tours in German and English language.

Another relevant factor was local knowledge. Other sightseeing flight providers are often headquartered elsewhere, and Frankfurt is only one of many places on their weekly flight lists. Such providers may rotate pilots, with a shifting schedule due to their remoteness; therefore they know much less about Frankfurt and the Rhine-Main area than pilots whose home airfield is Egelsbach.

And because Helifliegen.de is headquarteres directly at Egelsbach Airport, it also has a fair-weather guarantee: you take off when the weather is especially nice!

The point of Departure: Frankfurt-Egelsbach Airport

Almost all skyline flights heading to Frankfurt start in Egelsbach. The Egelsbach Airport has been operating under the Frankfurt-Egelsbach Airport brand since it was privatized in 2009. It is located between Darmstadt and Frankfurt, some 17 kilometers south of Frankfurt city center.

Egelsbach Airport is best reached by car. There are hundreds of free parking spots by the hangars and control tower. There is also a connection to the Egelsbach S-Bahn station on the S3 and S4 commuter lines in the RMV local rail network.

The Egelsbach airfield has more traffic than any other small airport in Germany: not only helicopters take off here, but also a large number of small planes and jets. The Air Squadron of the Hessian Police bases its helicopters here. It is a busy little airport.

The passengers were scheduled to meet a quarter hour before departure at the entrance portal to the Egelsbach airport tower. The pilot welcomed the three passengers in the foyer and introduced himself as Heiner Börger. Not only did the pilot look like one of them, he also looked very confident right from the start. You could feel his professionalism and his passion for flying.

After a few minutes of small talk we finally headed for the airfield. The passengers walked through the reception building onto the tarmac. Airplanes and helicopters stood everywhere. The passengers were keen to fly to Frankfurt.

The pilot led us to a Robinson R44 helicopter, a relatively small model that is practical and cost-efficient for sightseeing flights. There is little distance to the large windows, giving the passengers and copilot a good all-around view.

The Flight Route: from Egelsbach to the Skyline

The pilot again explained the technology: An impressive tangle of switches, levers, and pedals makes it possible to bring the helicopter safely through the air. The passengers received headsets with a radio connection to the pilot, because it is too loud in a helicopter to hear others without earphones.

There is no direct route from Egelsbach to Frankfurt: the approach routes from Frankfurt International Airport are too close. Passing aircraft like helicopters have to follow certain flight corridors.

The Helicopter Flight: Take-off and Acceleration

Then things went fast: take-off permission from Tower Egelsbach, a short flight from the starting point to the take-off position between the runways, and then… acceleration. “We are flying!!!”

“Trees, trees, trees…. forest everywhere,” we all thought. In the distance you could see different cities, but all in a bed of dense green. There was no doubt that Frankfurt and the Rhein Main region lie in the middle of nature.

The helicopter climbed to a height of about 500 meters and passed Langen in a long arc. From above we saw Wolfgarten Castle. More than one passenger exclaimed “Wow, that’s cool!” The Frankfurt skyline was still far away.

The Pilot: Informed and Familiar with the Location

Then it went to the east of Frankfurt via the Main river. We saw the ECB and looked at the majestic skyline, including the skyscrapers currently under construction.

The passengers had an incredible view over the city. The cameras were running hot, and each passenger felt overwhelmed. Is it better to enjoy the moment, take pictures, or record a movie? No matter what one chose to do, this moment was clearly unique, and Frankfurt looked much better from above than from below.

After a loop over Sachsenhausen we flew north from the West Harbor. Above the European District the helicopter finally stayed in the air for some time and slowly turned. From here one could see the skyline of Frankfurt in all its splendor, with the construction sites of ONE, Grand Tower, and The Spin. You could also see the Financial District with the Commerzbank Tower and the huge Central Rail Station. It was almost impossible not to feel amazed.

The helicopter flew back south, along the Main River with a fantastic view of the skyscrapers. By now it was clear to everyone that the Frankfurt flight was breathtaking and is a great addition to any city visit. 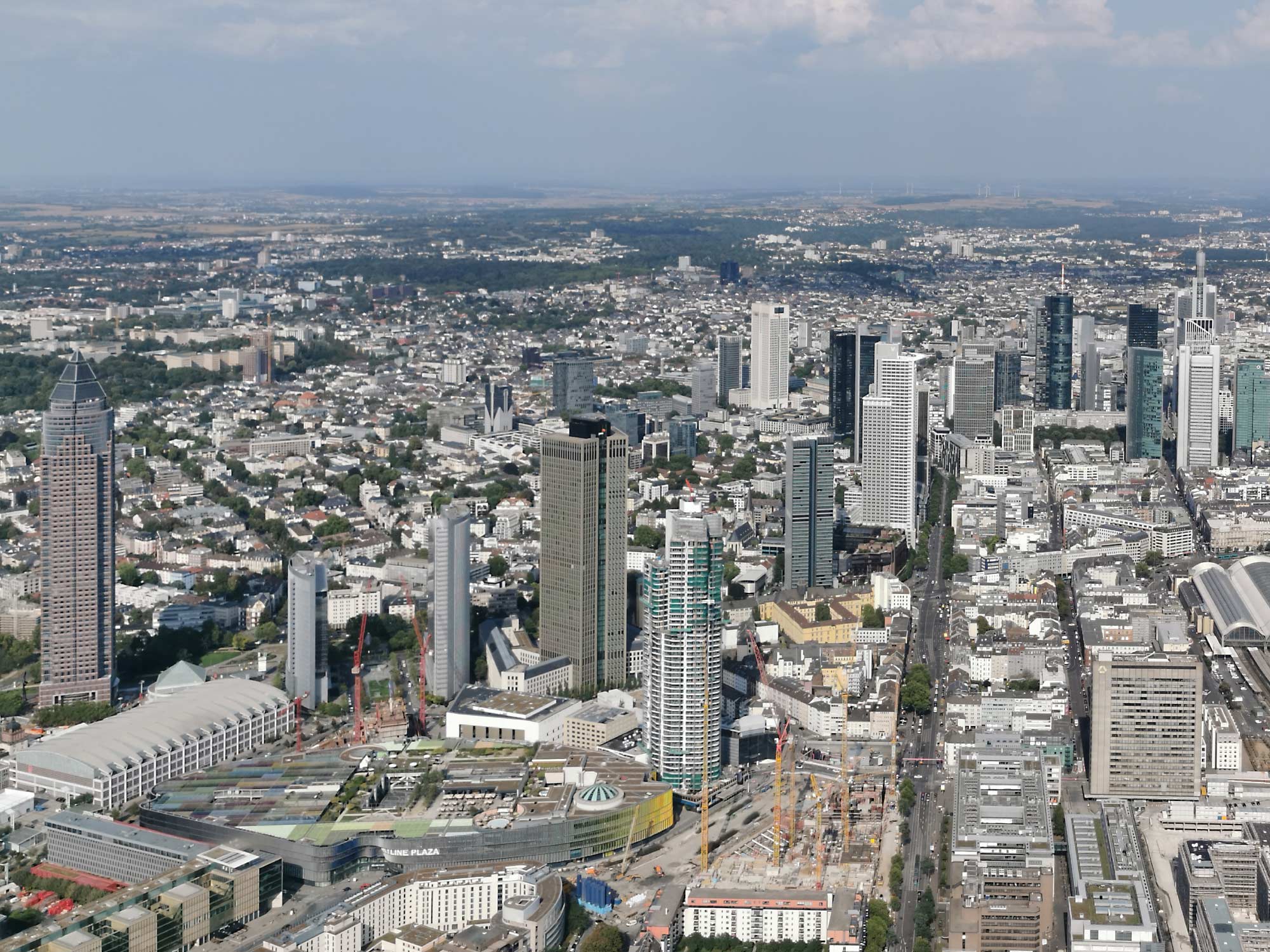 The pilot finally steered the heli back onto the route we came on and landed safely in Egelsbach after about 30 minutes. The engine cooled down and the passengers got out satisfied. The passengers were also there when the helicopter was brought into the hangar and continued asking questions about the flight.

The helicopter flight over Frankfurt was better than originally expected. It was professionally organized and, above all, a lot of fun. You learned many facts about flying and you had enough time to take photos and videos of the Frankfurt skyline. A window seats starts at 199 Euro per person. The helicopter flight with with Helifliegen.de is therefore a recommendation.

Helifliegen.de also offers special flights: Photographers can book photo flights without doors, real estate experts can be flown nationwide to certain locations, and hungry people can land at the Burger King, just like a fly-in!

Everything about Frankfurt Skyline

SKYLINE ATLAS is the information medium on the skyscrapers in Frankfurt. Here you will find next to worth knowing details on the single skyscrapers especially also urban development trends, development plans and interviews with key people.

News via email:
To the newsletters