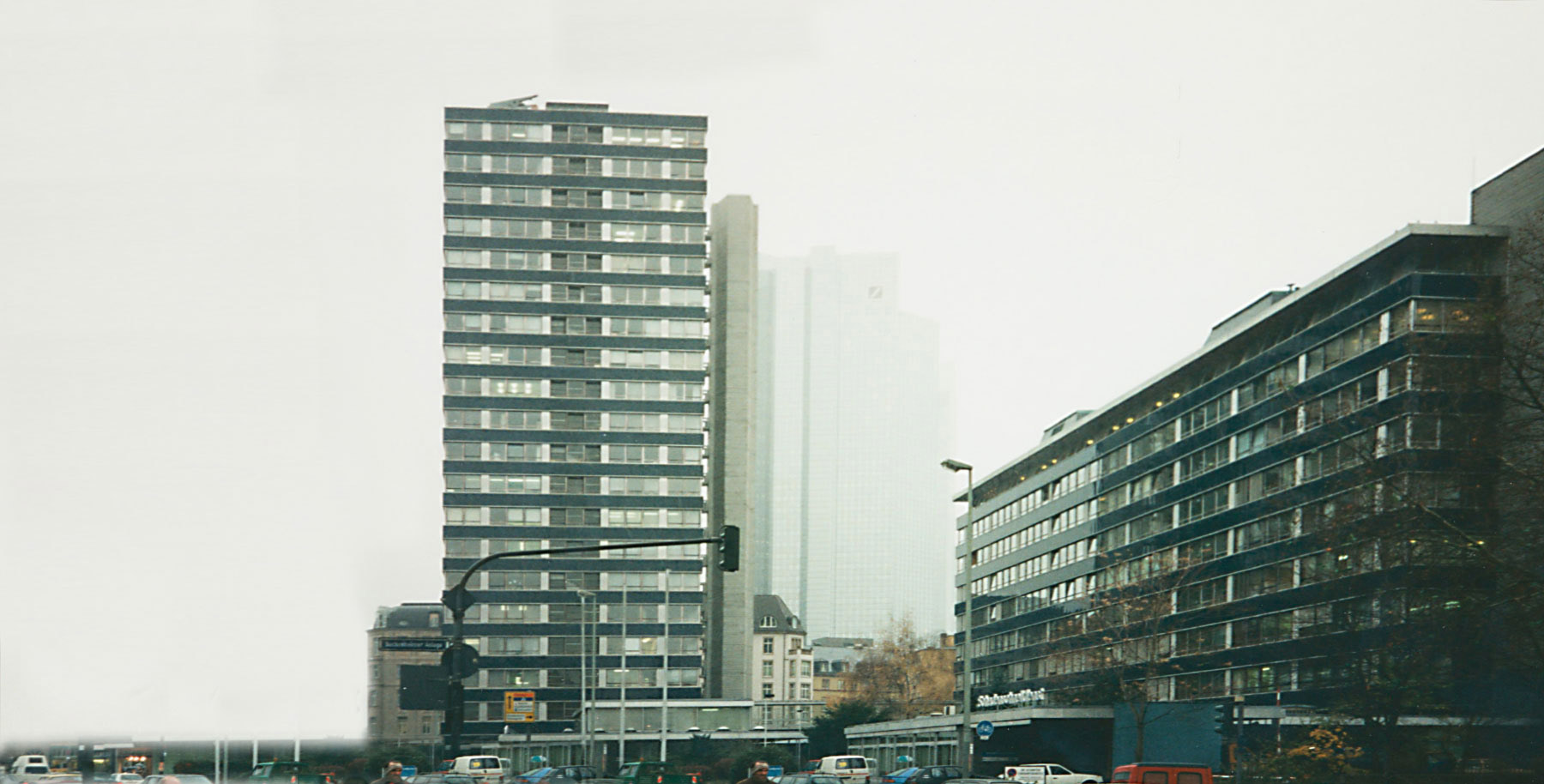 The Zuerich House (in German: Zürich-Haus) was a 68 meters high-rise building on Frankfurt’s Opernplatz. The 19-storey Zuerich High-Rise was designed by the architects Udo von Schauroth and Werner Stücheli. The Zuerich House was built between 1958 and 1960 and was one of the tallest office buildings in Frankfurt when it was built. In 2002 the high-rise tower was demolished and a few years later the much taller OpernTurm was built on the same spot.

The construction costs for the Zuerich House were around 20 million DM (in today’s purchasing power € 46.62 million). On May 28, 1962, the opening ceremony of the new building took place in the Emperor’s Hall (Kaisersaal) of the Roemer City Hall in the presence of the Swiss Consul General, the Mayor of Frankfurt and numerous guests from politics and business. In November 1960 they moved into the Zuerich Building.

There were around 1,000 workplaces in the Zuerich Building, spread over 14,000 square meters (150,695 square feet) of usable office space. First-time tenants included the Swiss Consulate General, Procter & Gamble, Merrill Lynch, Morgan Guaranty, Crédit Lyonnais, Alitalia, Siemens, and Lurgi. The building complex was even given its own address by the post office: Zuerich-Haus am Opernplatz (lit. Zuerich House at Opera Square).

The technical innovations of the building included two pressure boosting systems for drinking and extinguishing water, an emergency power supply for the elevators and the lighting of the escape routes as well as an automatic sprinkler system in the underground car park. The three automatically controlled elevators reached a speed of three meters per second. The stairwell in the north wing was only intended for emergencies. At the end of the 1970s, another escape staircase had to be installed on the outside of the high-rise, which severely impaired the external appearance of the slim tower.

The construction of the Zuerich House brought about a critical phase for Frankfurt’s urban development: In his opening speech, Lord Mayor Werner Bockelmann announced that the Westend should become the new expansion area for the cramped Frankfurt city center. The building speculation that began in the Westend in the following years finally ended in the Frankfurt House Fights in the late 1960s and early 1970s.

In the mid-1950s, the Zuerich Insurance Company (Zürich Versicherung) acquired the property on Bockenheimer Landstrasse in the immediate vicinity of the Old Opera (Alte Oper) from the heirs of the Rothschild family. The area had previously belonged to Rothschild Park. The classicist Palais Rothschild, a work by the architect Friedrich Rumpf from 1832, was badly damaged in the war and the ruins were torn down in the early 1950s.

In autumn 1958 the architects presented their plans to the public. They envisaged a 19-storey tower standing on pillars with a square floor plan of 22 meters edge length on Opernplatz square and an eight-storey longitudinal building measuring 70 × 20 meters towards Rothschild Park. The two buildings were to be connected by a low-rise building. A two-story underground car park with 200 parking spaces was planned under the building complex.

Construction of the high-rise began in autumn 1959. First of all, the reinforced concrete core with an edge length of seven meters was built, which accommodated the supply facilities and three elevators. The facade was first erected as a curtain wall facade, in which the eight centimeter thick facade parts made of anodized aluminum were hung and screwed in front of the reinforced concrete skeleton. Due to the small wall thicknesses and the weak insulation, the employees later complained because the facade heated up strongly in the sunlight and the heat was dissipated inside the building.

The Zuerich House was declared a cultural monument in 1989 by the Office for Monument Preservation of the State of Hesse due to its building history. The owners then brought an action for declaratory judgment that the building was not a cultural monument. The process ended with a comparison: The State of Hesse finally agreed not to claim for at least ten years that the complex was a cultural monument. The owner then planned the demolition in 1998. The Zuerich House was to be replaced by a 90 meter high new building designed by Christoph Maeckler with 2,000 workplaces. After disputes with the city, which rejected the very broad and compact design, the architect proposed the construction of a slim, 168-meter-high tower. In return, the Rothschild Park was to be enlarged by 5,500 square meters and redesigned.

The City of Frankfurt approved these plans and in 2002 allowed the Zuerich Building to be demolished. After the dismantling, the Zuerich Insurance Company did not start the new building due to its own economic problems. The site lay fallow for several years until it was finally sold to the project developer Tishman Speyer Properties in July 2004.

In January 2007 the construction of the now called OpernTurm began, which was completed at the end of 2009.