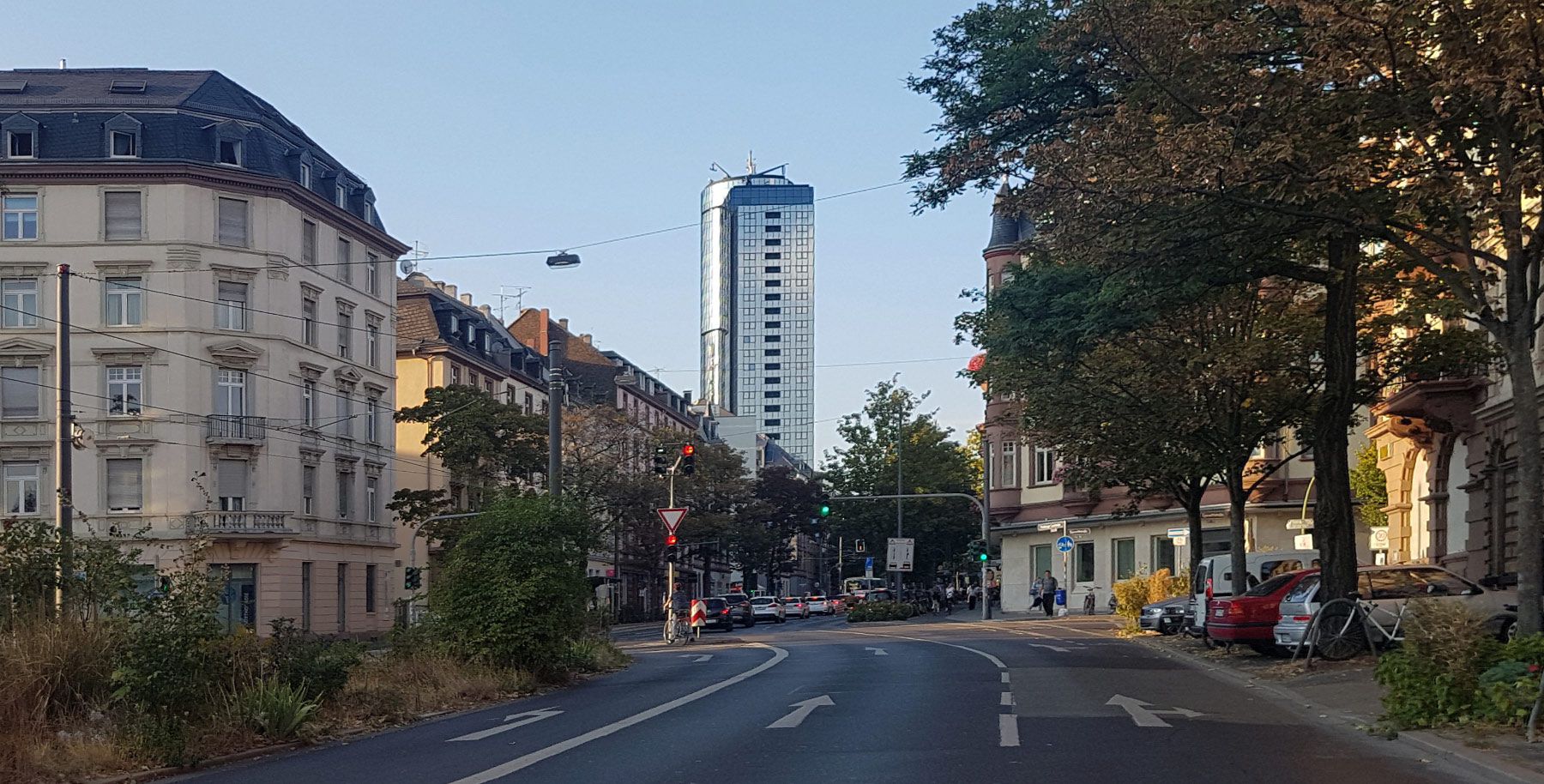 Score: 91 of 100
Powered by ViertelCheck

City Gate is a 110-meter (361 feet) high-rise office building in the Nordend district with 22,000 square meters (236,806 square feet) of usable space. City Gate is located on Nibelungenplatz, an important and busy hub in the north of Frankfurt. Here, the Nibelungenallee and Rothschildallee streets meet Friedberger Landstrasse and the district streets Nordendstrasse and Hallgartenstrasse.

City Gate is now home to the General Consulate of the Kingdom of Spain, the Frankfurt University of Applied Sciences, Berami e.V., a law firm, an insurance broker and a supermarket in the base. In May 2019, the local radio station Radio Frankfurt moved into the 27th floor of the City Gate and operates the nation’s highest radio studio there.

City Gate has had a complex development history in the past few decades, which we describe as following.

Today’s City Gate was originally built from 1964 to 1966 for the oil company Shell according to plans by the architect G. Rheingaus. The 90-meter-high (295 feet) Shell high-rise was part of a development plan that encompassed the entire northern avenue ring, which provided for a conversion to the expressway and high-rise buildings at all important intersections. However, this plan was not pursued further except for another building at the intersection with Eschersheimer Landstrasse.

Between 1966 and the construction of the AfE Tower in 1972, the Shell high-rise was the tallest high-rise tower in Frankfurt. The initiator for the construction of the Shell high-rise was the real estate investor Josef Buchmann. In accordance with the fear of nuclear war at the time, an atomic shelter was set up in the basement for emergency use, which was used as an underground car park during normal operation.

The Shell high-rise was gutted in the course of a total renovation until 1993, increased by 25 meters (82 feet) and at the same time received a new architecture. The original facade made of aluminum-style curtain panels no longer exists today. With the renovation, it was repositioned as Buero Center Nibelungenplatz (BCN).

The renovation of the BCN highrise was designed by Novotny Mähner Assoziierte and received the current glass facade and a panoramic elevator. Since then, the base construction has been referring to the surrounding buildings. Two staircases were installed in the and a rotunda was built on the existing house. The BCN was a permanent location for the ZDF television series Ein Fall fuer zwei until 2013.

An American investor acquired BCN in 2015. Subsequently, renovation and redesign work was carried out in the building and in the outdoor facilities under the leadership of the architectural firm Skidmore, Owings & Merrill. Since then, the skyscraper has operated as the City Gate tower.

August 2019: Covivio got a loan agreement of 56 million from Godewind Immobilien AG. The loan served to finance the purchase of City Gate in Frankfurt at a net purchase price of EUR 85 million.