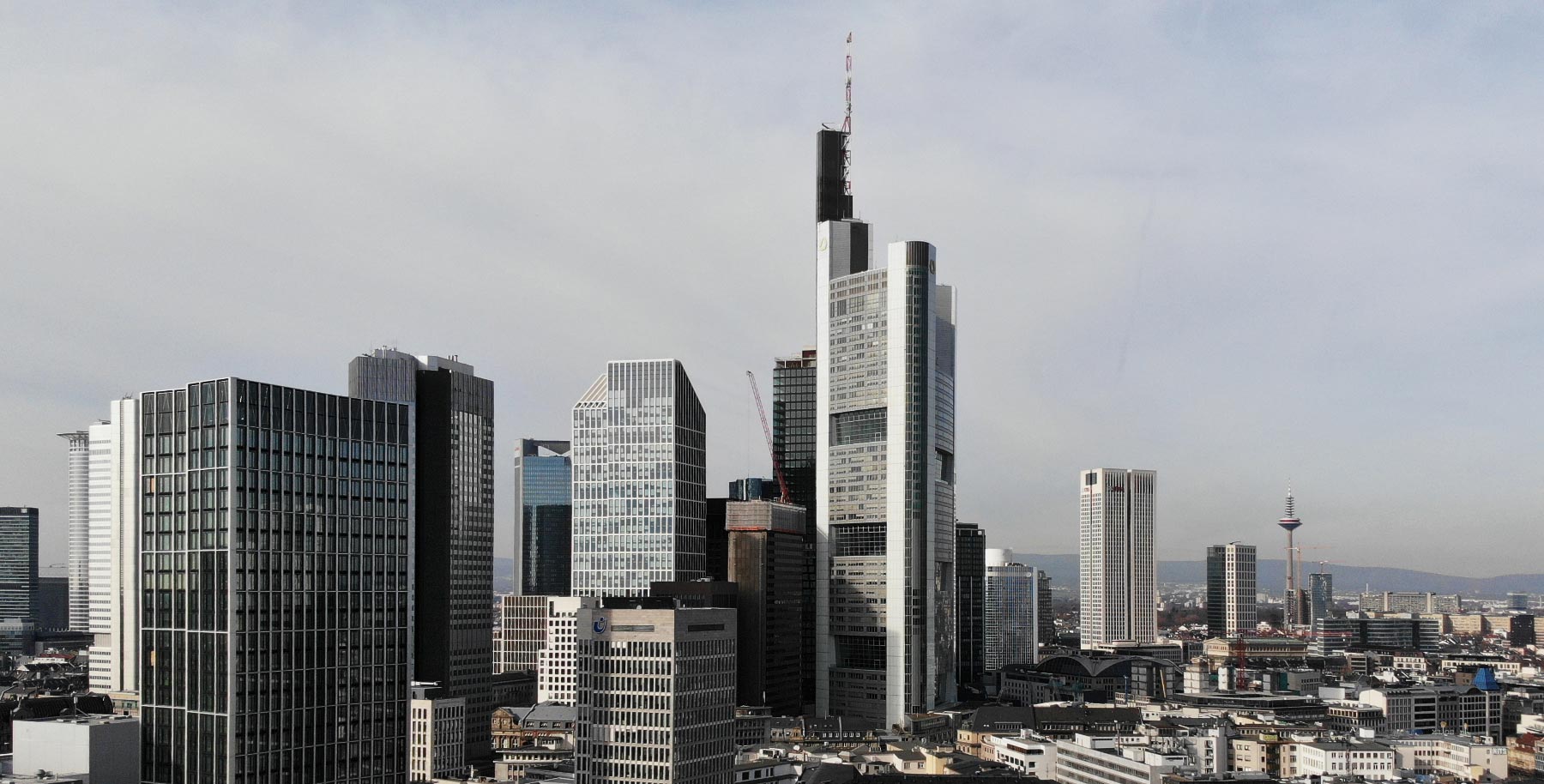 Since 1997 the Commerzbank Tower has dominated the Frankfurt skyline. Measuring almost 300 meters to the tip of its antenna, the skyscraper was built as Europe‘s tallest office building.

Star architect Sir Norman Foster set a new path in skyscraper construction. The supply conduits usually seen at the central core of high-rise buildings were placed in the corner zones of the triangular tower, allowing a light-flooded central atrium. Seen close up, the building’s elegant lobby and facade are impressive. The facade was produced by Josef Gartner GmbH.

The office tower has further outstanding features: at the base of the building are the low-rise wings, consisting of an event building, a car park, shops, and several apartments. A glass-covered plaza houses the Commerzbank canteen, which is open to the public. Nine glass-walled sky gardens (each 15 meters high) are arranged in a spiral offset around the skyscraper, with 3 sky gardens per facade side. A unique steel frame construction allows a 34-meter column-free space in each of the gardens. 111 x 1.8 m thick anchors support the main load of the 180,000-ton contruction, which reaches up to 48.5 meters into the deep bedrock of Frankfurt.

Commerzbank was the world’s first “green” skyscraper. Thanks to its innovative management technology, the bank tower is still competitive with later “green” constructions. The office building is extremely well ventilated and features an advanced air conditioning system designed by Siemens. Since 2008 Commerzbank Tower has been powered with ecological energy and is only cleaned using ecologically friendly cleaning materials.

Commerzbank Tower is the headquarters building of Commerbank AG. Critics, however, see an imbalance between the surrounding area and the large building mass for the chosen location in Frankfurt’s Financial District.

Commerzbank has offices in several other Frankfurt buildings, including the Gallileo high-rise, the Fürstenhof, the Kaiser Karree, the Commerzbank service center with Europe‘s largest trading floor, the Neue Börse campus, and the Commerzbank Digital Campus.

You can now download the Commerzbank Tower crafting model. The skyscraper is part of the cut-out sheet series ARCHITECTURE with sauce, which is aimed at children and adults. The implementation of the handicraft template was made possible by SKYLINE ATLAS.

Status August 2020: Commerzbank Tower is likely to lose its title as the tallest skyscraper in Germany to a new tower in the European District Frankfurt.

A wonderful moment in Frankfurt: Commerzbank Tower at sunset. Photographed by Anne Beringmeier.

Four new skyscrapers are currently under construction on the opposite street side of the Commerzbank Tower as part of the FOUR Frankfurt project.