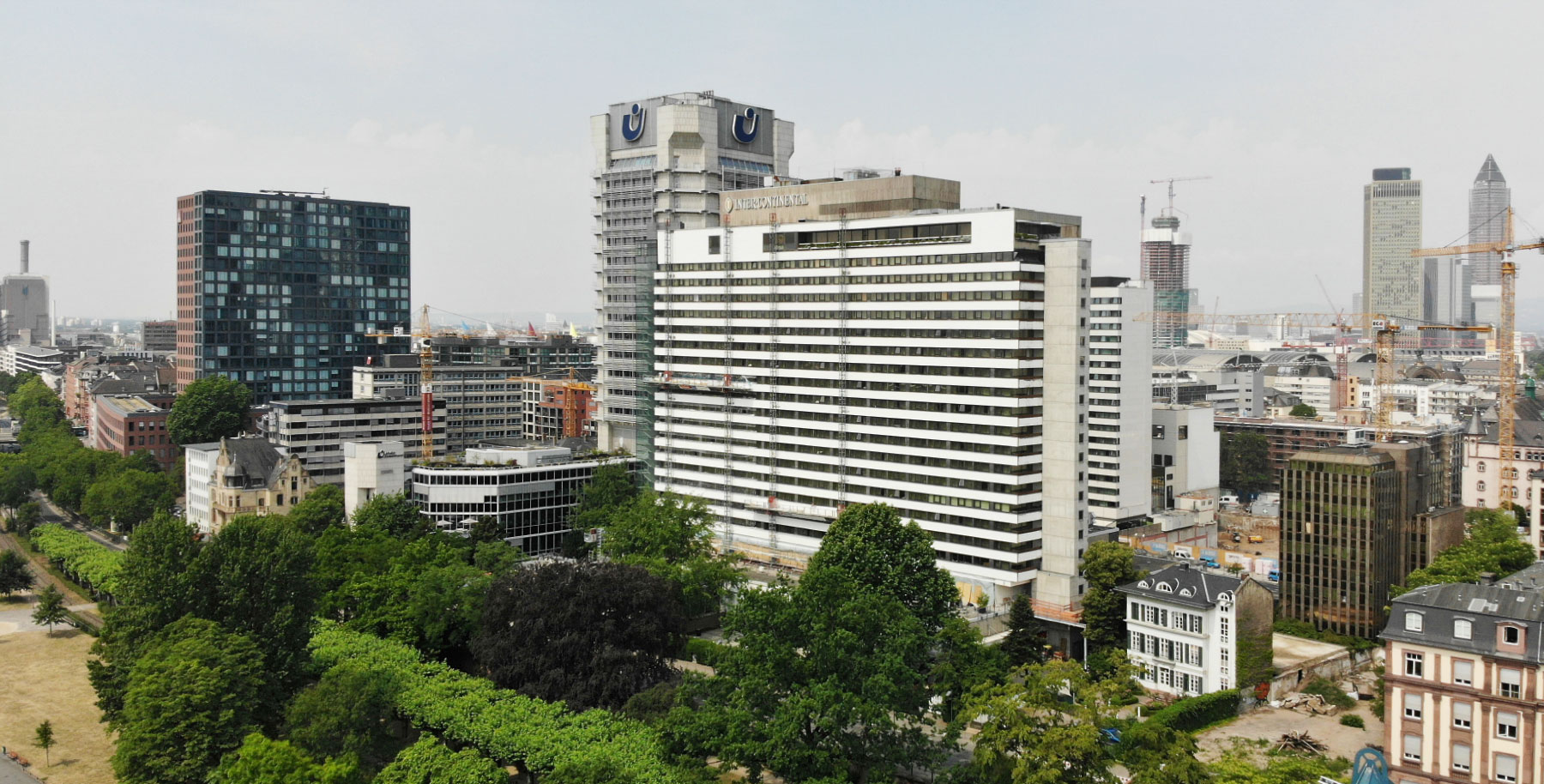 InterContinental Frankfurt is an elongated, rectangular structure and houses 470 rooms. The building has a simple design, typical for the construction period. Only a horizontal structure is achieved by changing the surrounding ribbon windows and cladding the parapets with a very dark natural stone. Since the natural stone has darkened and soiled due to the weather towards the south, the building often looks falsely like exposed concrete from a distance. On the sides, low, low-rise buildings connect to the north and south. The northern part houses the main entrance on Wilhelm-Leuschner-Strasse, which was changed in the 1980s by a porch; the southern part has a restaurant with a roof terrace.

Only the 22nd floor (21. OG) of the hotel tower has a more extensive design than the regular high-rise floors, has a few window cuts and a long opening for the terrace of the rooftop restaurant. On the narrow sides in the east and west there are stairwells, of which the more prominent western one stands free and is connected to the main building via open walkways. On the flat roof end there is a technical floor, which is slightly recessed compared to the floor plan.

The foundation stone for the InterContinental Frankfurt was laid on June 8, 1961, the official opening after almost exactly two years of construction on June 6, 1963. The construction costs for the project amounted to around 40 million marks.

At the inauguration, it was not only the largest hotel in Germany in terms of rooms, but also one of the tallest buildings in the city. Notable features at the time were a. the availability of a bathroom with toilet and a TV in each room. In addition, several bars, restaurants, four banquet halls, a ballroom, a cocktail lounge and a hairdresser were available to guests.

As early as March 2009 it became known that a renewed renovation was to take place, in the course of which new staircases in particular were built on the side of the high-rise tower. In the meantime, planning with visualization by the Schneider + Schumacher office had also become public, but was not implemented.

At the beginning of 2011, the previous owner sold the building to the Lebanese investor Toufic Aboukhater for around 60 million euros. Around a year later, the new owner separated from the City Wing with effect from March 1, 2012. The proceeds from the sale will be used to renovate the River Wing so that the hotel can catch up with the top properties in the city with new conference and congress rooms.

The Union Investment High-Rise is located directly to the west of the InterContinental Frankfurt.

Status October 2021: The Hotel Interconti is currently closed permanently and is being extensively refurbished. It is scheduled to reopen in a new guise at the beginning of 2025. Curious: the interior is currently available for auction on eBay.

Status September 2021: Two residential buildings are to be built next to the hotel complex, thereby closing the edges of the whole block. Further details on these construction projects are currently not available. A project-related local development plan has already been drawn up by the City of Frankfurt, but this has not yet been approved by the city council.

Status August 2020: Due to the corona pandemic, the InterContinental Frankfurt is completely closed to guests.