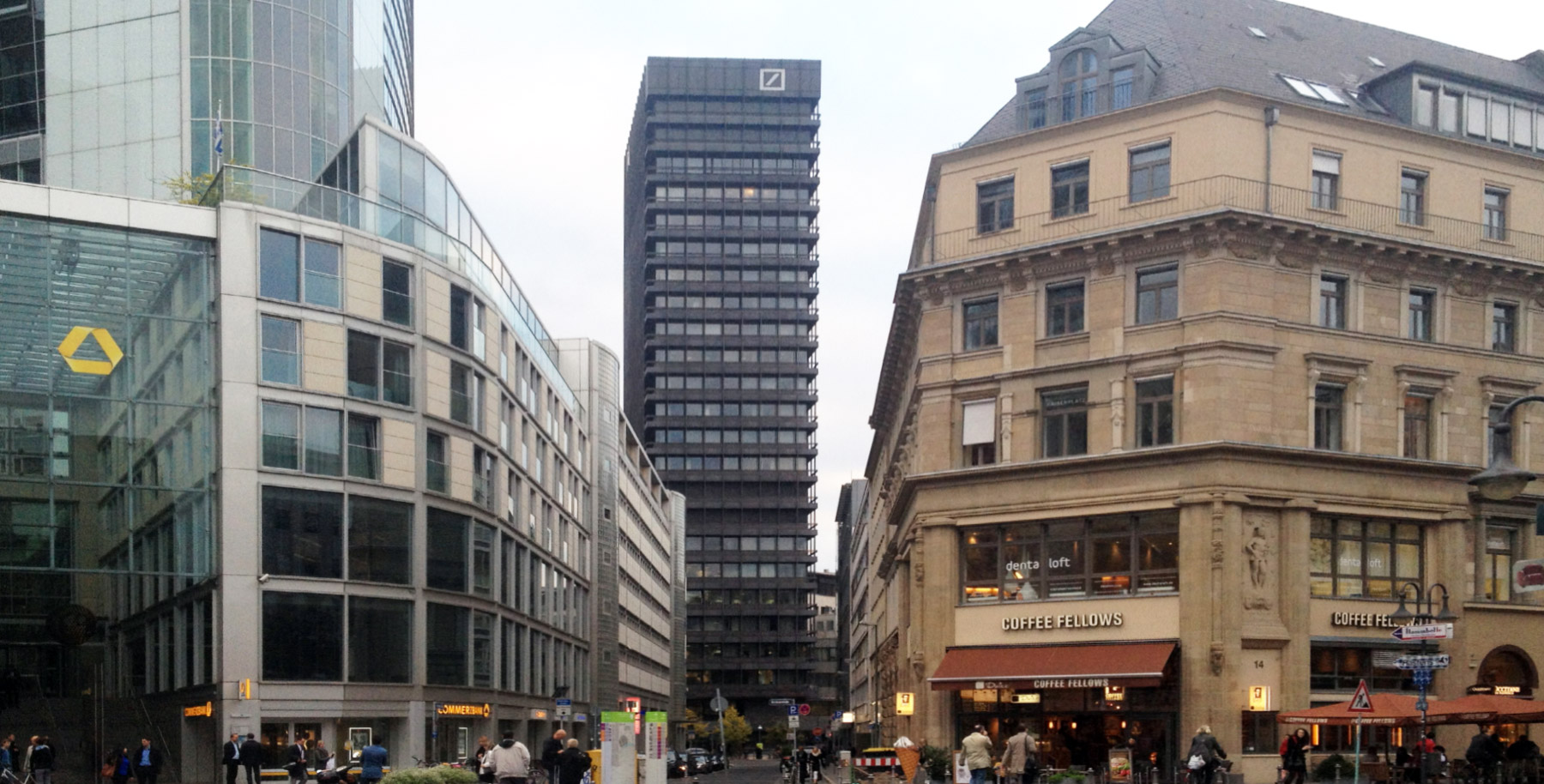 In 1971, Deutsche Bank AG built a 25-storey office tower in the Financial District, which has since been demolished. The design originated from plans by the architect F. Wilhelm Simon and was one of the few high-rise buildings of this generation that had remained largely unchanged. The building was constructed by Philipp Holzmann AG.

The building stood on an elongated, rectangular parcel with a north-east-south-west orientation. The majority of the built-up area was made up of an elongated, seven-story wing in the southwest. A slightly lower, mostly glazed annex connected to this in the northern courtyard. The 25-storey main house stood across it in the northeast of the plot.

The uniform design of the side wing and high-rise was shaped by the later phase of the international style. Each storey had all-round ribbon windows; the small parapet surfaces as well as a part of the connected low-rise building in the south-west that was cut out by the curtain wall were clad with dark natural stone. The curtain wall was made of dark brown steel and accommodated the horizontally surrounding balconies with parapets.

In the 1950s, Deutsche Bank began to acquire properties between Junghofstrasse, Neuer Schlesinger Gasse and Grosse Gallusstrasse. The aim was to create a closed area behind the 1904 bank building on Rossmarkt, which could accommodate extensions.

In 1966 the first plans for the construction of a high-rise were made. Between 1969 and 1971 the high-rise tower was then built for Deutsche Bank AG. The 93 meter (305 feet) high office building was designed in an international style.

The office tower was used by Deutsche Bank and later by Deutsche Morgan Grenfell in particular as a trading center. Around the turn of the millennium, the location Investment Banking Center Frankfurt was christened, which is why the tower was abbreviated in 1998 by Michael Wutzke in his original high-rise database Deutsche Bank IBCF – and is therefore still listed like this today in various databases and Wikipedia.

In 2015 Deutsche Bank sold the high-rise building and the surrounding land (Deutsche Bank triangle with the exception of the historic house on Rossmarkt). The high-rise and the other buildings were then dismantled as part of the rebuilding of the area between April and October 2018. The former Deutsche Bank property will now be developed by the FOUR Frankfurt project until 2024.

Status November 2020: The German Sustainable Building Council has awarded FOUR Frankfurt a certification for the dismantling of the existing buildings.