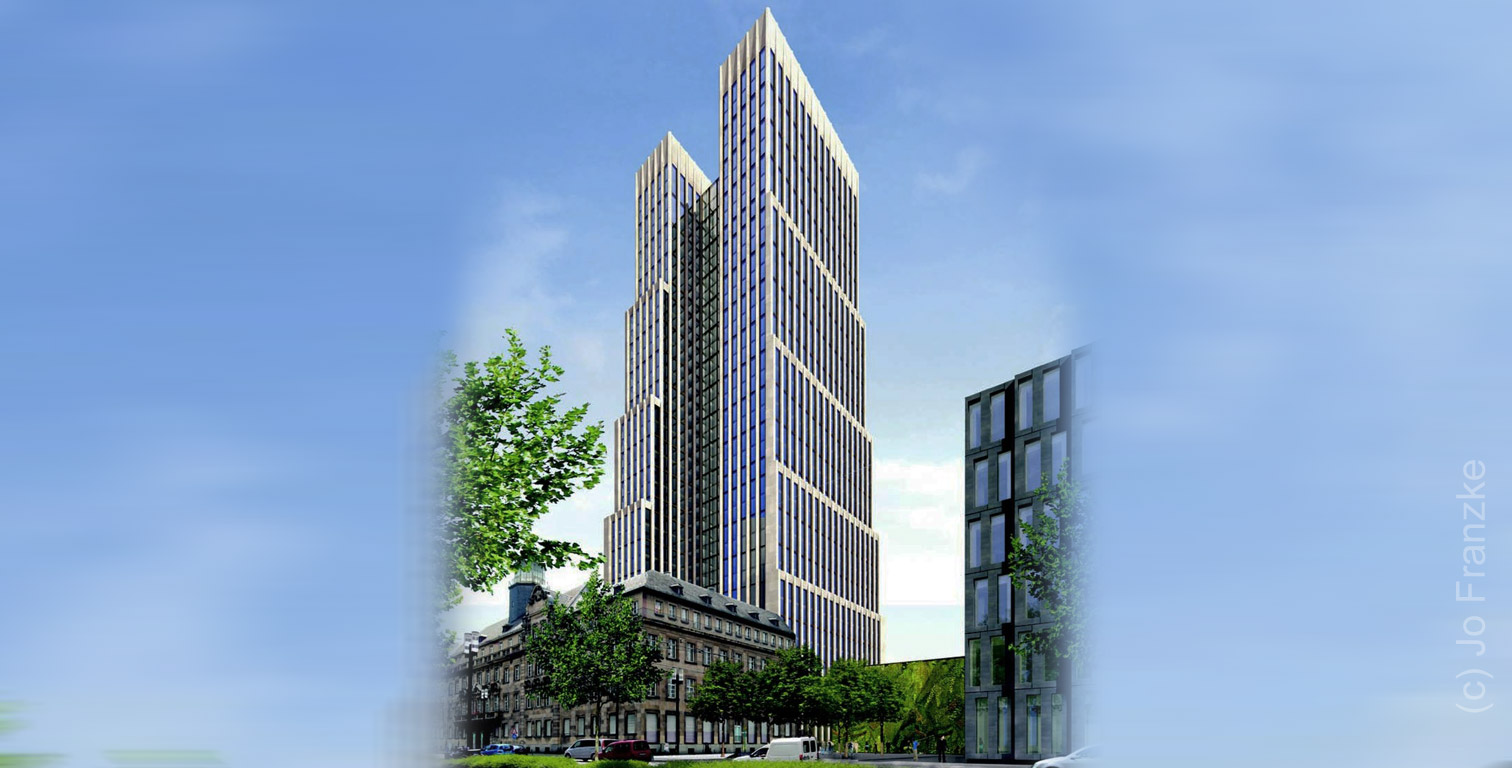 A high-rise project is to be built on the site of the former police headquarters at the Friedrich-Ebert-Anlage. For the first time, the plans for the skyscraper in the high-rise development plan 1998 emerged. On the approx. 15,000 square meters (161,458 square feet) lot of the former police headquarters, a high-rise tower of up to 145 meters (475 feet) in height was foreseen at the time.

Since 2001, the state of Hesse had sought a sale to an investor. A sale became obviously not possible because of too excessive price expectations and a slump in the real estate market. For many years, the police building was vacant and was used only sporadically commercially. There were also disagreements with the City of Frankfurt over the use of the lot.

It was only in 2010 that talks with investors and project developers started again. The sales process was entrusted to the consulting firm BNP Paribas Real Estate Consult, which had previously reviewed the marketing opportunities for the property. In August 2011, the architect Jo. Franzke presented a mass design study for the planned high-rise building with a gross floor area of ​​95,000 square meters (1,022,571 square feet). This preliminary design, as shown in the computer animation above, shows a condition not likely to be actually constructed. The project developer still plans to carry out an architectural competition for the site.

In addition to the high-rise development, two hotels, including a 5-star hotel in the listed old building of the former police headquarters, and apartments in the block edge are planned. For better development, a new road will lead over the property. The entire area is said to be publicly accessible. The City of Frankfurt supports the construction of several hundred apartments, schools, day nurseries as well as social or cultural facilities on the property. However, there are fears in the administration that, above all, luxury apartments will emerge.

Status February 2020: According to Frankfurter Rundschau newspaper, Gerchgroup has abandoned the idea of building more than a skyscraper on the site of the former police headquarters. According to Mark Gellert, spokesman for planning director Mike Josef, the City of Frankfurt still believes that a variant is possible in which several lower high-rise buildings can be built. The planning department referred to the planned architecture competition and was in constructive talks with Gerchgroup. The adjacent area of the Matthaeus Community (Matthäusgemeinde) is not part of the urban planning competition for the police headquarters site. At the Matthaeus Community site, the 2008 high-rise master plan proposed the construction of another tall building.

Status September 2019: Gerchgroup is currently preparing an international architectural competition for the 4.2-hectare site at the former police headquarters, which consists of 15 renowned architectural firms which have been invited to propose plans. By the year 2026, at least 400 flats as well as offices and hotels are to be built on the dedicated area at Friedrich-Ebert-Anlage. The working title for the project is currently “Das Präsidium”. The competition is expected to end in August 2020 with the selection of the winning design.

Status January 2019: Mathias Düsterdick, CEO of the Gerchgroup, gave an interview on the high-rise project presented here. Düsterdick said that the City of Frankfurt had not yet reached an agreement with them on how the project would precisely look. A tall skyscraper could be constructed, as originally planned, or the building mass could be split into several high-rise buildings each having a lower height.

Status February 2018: The property was sold by the State of Hesse to Gerchgroup from Dusseldorf. According to the Gerchgroup press release dated March 1, 2018, the purchase price was € 212.5 million. As agreed upon in the contracts, the State of Hesse and Gerchgroup have agreed not to reveal details about the transaction.