About the Future of our Cities

SKYLINE ATLAS: Mrs. Roth, as vice-president of the Association of German Cities and Lord Mayor of the City of Frankfurt, I would like to hear your thoughts on the future role of German cities. What are the challenges facing our big cities in the near future?

Petra Roth: There are indeed a number of challenges, with each German city being affected differently. Berlin, for example, has a special position, but so too do city states like Hamburg. Budget consolidation is certainly essential for all of them in these times of decreasing tax income. The relationship between unavoidable consolidation and indispensable investment will be very important. All major cities have security problems, cultural financing is an issue, integration of the foreign population, education and training for young people: this is really about the future of urban society.

SKYLINE ATLAS: What is the role of urban development?

Petra Roth: This is a very significant factor for the cohesion of urban society and the promotion of location. The loss of new businesses and residential areas, the ratio of housing, work and leisure quality is becoming more and more significant. This applies even more so to the development of inner cities.

SKYLINE ATLAS: More and more European cities are planning more modern, interesting projects. What are the main developments in Germany?

Petra Roth: Globalisation is becoming a reality in Germany’s big cities. However, the respective regions are playing a growing role. Thus, the Rhine-Main region centred on Frankfurt competes with comparable regions in the Benelux countries, France, or southern England. It is important to build on the region’s strengths, for example in tourism, transport infrastructure, culture, a strong investment climate, and effective administration.

SKYLINE ATLAS: How do our big cities compare internationally?

Petra Roth: They do pretty well, but their differences must be specified. It is problematic to compare Berlin to metropolises such as New York, London, Paris, and Tokyo. But Hamburg, Cologne, Munich, and of course Frankfurt can measure themselves against comparable cities and come off excellently. Frankfurt, for example, immediately follows the cities mentioned above as a financial center.

SKYLINE ATLAS: You often have to travel abroad. What is the general impression of German cities?

Petra Roth: It is strongly differentiated according to their respective profiles. Munich, Cologne, and Frankfurt are associated with their specific services.

SKYLINE ATLAS: Let’s talk about Frankfurt. In the coming years, it seems there will be a lot of urban development. How do you explain this new development?

Petra Roth: We have succeeded in breaking down the ideological blockades that dominated the eighties and early nineties. It is not the height of a house that is decisive, but its design and how it fits into its surroundings. It has gradually become established that we are in fierce competition with other cities, regions at home and abroad. Nothing will happen by itself. We must work harder. The meaning of this reality has been sharpened in recent years.

SKYLINE ATLAS: Representatives of Frankfurt strive to improve its image through events, especially abroad. Isn’t it time to do something like this nationwide here in Germany?

Petra Roth: Both are necessary, and this is also happening. As an international city we must, of course, promote ourselves in New York, in the Far East, and on the MIPIM in Cannes. We are of course already working on business promotion and making people aware of the cultural institutions throughout Germany. As I said, coordination is gaining importance.

SKYLINE ATLAS: New York City started its own image campaign, ‘I love New York’ in 1974. Could this be an example for Frankfurt?

Petra Roth: We are always thinking about image campaigns. This also applies to the euro [our currency] and not just Frankfurt. But the campaign really needs to fit our city to convince people.

SKYLINE ATLAS: Could you, give our readers insights on new perspectives in city planning?

Petra Roth: The inner city will be considerably renewed. According to proposals from the competition, the Zeil shopping street will get a facelift, and a cultural mile on Braubachstrasse will be created. With the European District, a completely new district is growing alongside the exhibition grounds, plus the new construction of the European Central Bank in the east. Great city planning perspectives are opening up.

SKYLINE ATLAS: Please draw us a picture of how Frankfurt could look in 15 years.

Petra Roth: An economic boom in the city with a unique expanded skyline, making it unmistakable among all other major German, even European, cities. A city with a high level of cultural offerings, and a safe and attractive financial metropolis.

SKYLINE ATLAS: Thank you for the conversation.

The interview was conducted in 2001. 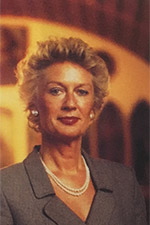