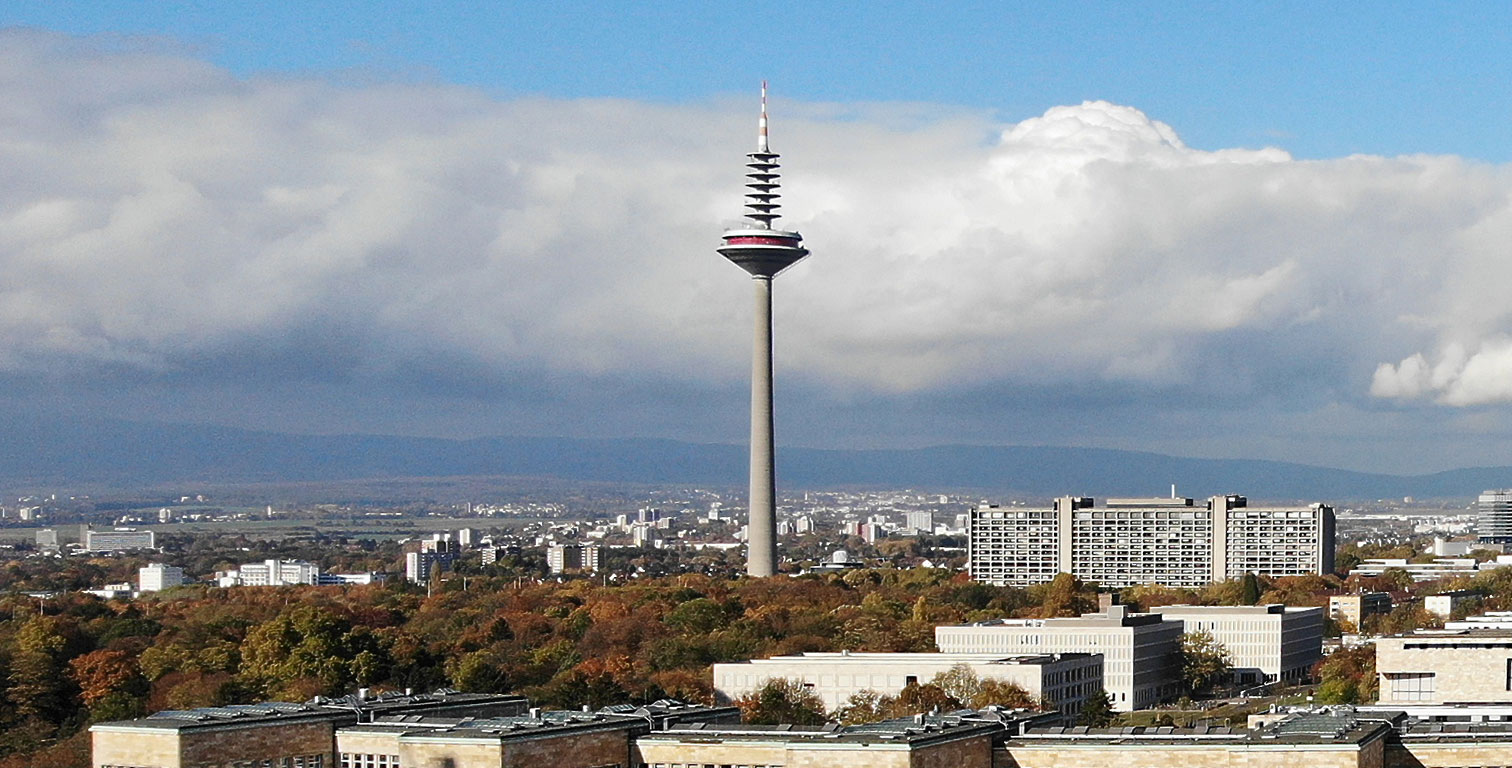 The tallest building in Frankfurt is not a skyscraper, but a telecommunications tower. The construction of the Fernsehturm Frankfurt (lit. “Frankfurt TV Tower“) was carried out by the architect Johannes Möhrle with the collaboration of Peter Metzger and Erwin Heinle and was started in 1974. The operation of the Europaturm (lit. “European Tower“) was put into operation five years later. Since that time it is with a height of 331,15 meters (1,086 feet) with its completion the highest freestanding structure of the Federal Republic of Germany.

The ring foundations for the Europaturm are 18.50 meters deep in the marl soil, which has been completely filled with cement and silicate to make it sustainable. The tower shaft was raised with a climbing formwork, an annular mold, on which the workers concreted meter by meter in the height. The shaft tapers upwards: he has twenty meters in diameter at the foot, eleven meters directly under the pulpit. The pulpit is 227 meters (745 feet high), has six floors and a diameter of 59 meters (194 feet), making it the widest in the world. It offers a unique view of the entire Rhine-Main Area and the Frankfurt skyline. Unfortunately, the observation deck has been closed to visitors for more than 10 years and can not be visited. Today, the TV tower is used for communication purposes and as an elevator test tower of the Swiss company Schindler Aufzüge.

With its height of 337.5 meters (1,107 feet) the Frankfurt TV Tower is (after installing a higher antenna a few years ago) today the second highest in Germany after the TV tower in Berlin. Although the Berlin TV Tower on Alexanderplatz is altogether about 30 meters/98 feet higher, this is only because of its much longer antenna. If one only considers the height of the actual building substance (without antenna), the Europaturm in Frankfurt is higher. The pulpit of the Frankfurt Europaturm hangs about 20 meters (66 feet) higher than the Berlin TV Tower.

Status December 2020: On the night before new year the TV tower was illuminated with a cool light show.

Status November 2019: The television tower in Frankfurt will be opened to the public again after being closed for 20 years. The federal government is contributing almost 25 million euros to the refurbishment. A timetable for the reconstruction has not yet been set.