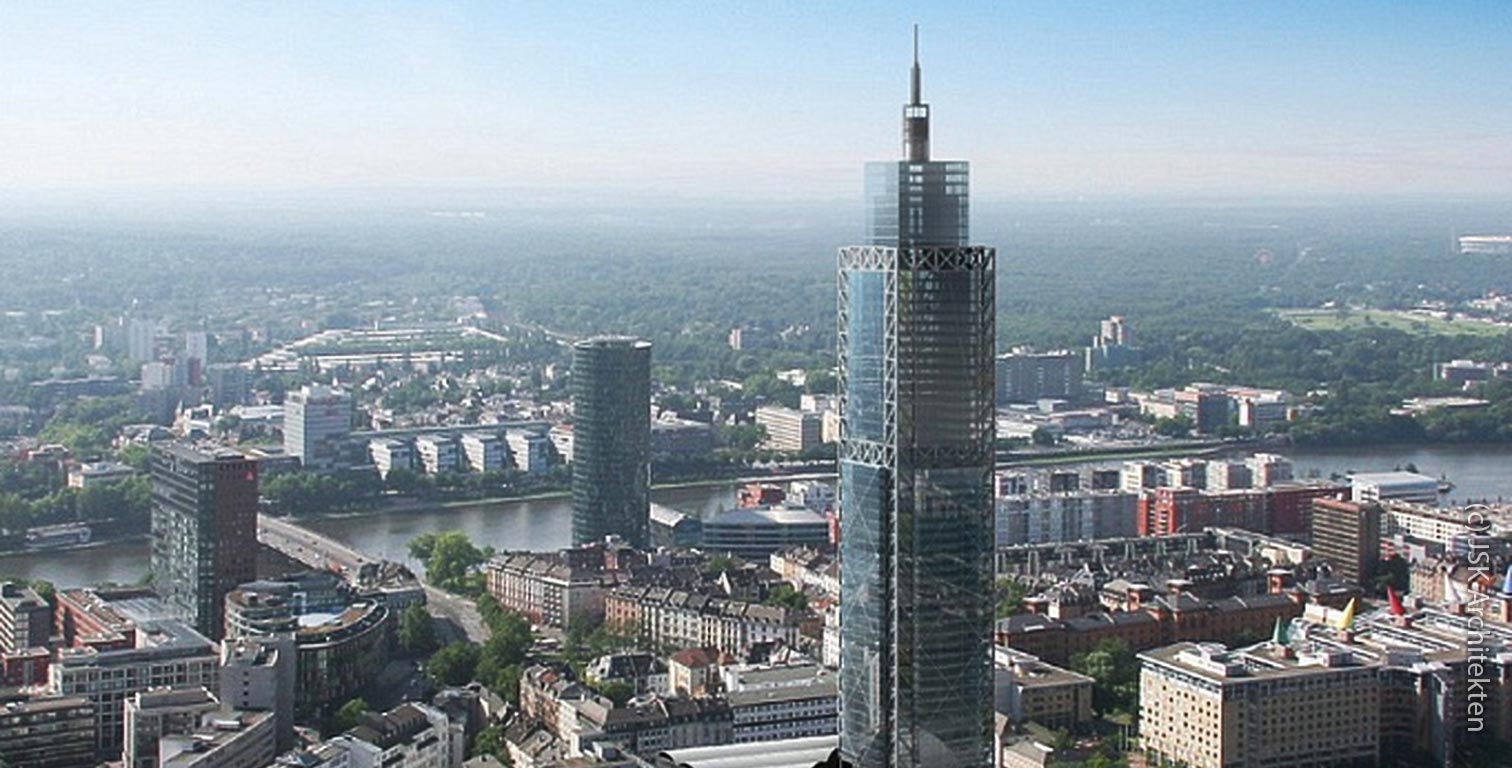 Campanile was a skyscraper up to 220 meters (722 feet) high, which was to be created in various planning variants in Frankfurt from the early 1980s, but was ultimately not built. A plot of land was planned for the Campanile tower south of the main train station (Hauptbahnhof), on which a parking space had been available since the 1960s. The name Campanile (bell tower) is derived from Italian church towers, which are often freely standing next to church buildings – in the Frankfurt case, the tower would have been built next to the “cathedral” main station.

The first draft, also called Bahntower, was carried out by the architect Hans Robert Hiegel with a total height of 180 meters (590 feet) on behalf of the City of Frankfurt. Another design for the Campanile, which received more media attention, was presented by the Frankfurt office JSK Architekten. This was followed by higher variants for the Campanile high-rise by both Hiegel and JSK Architekten. A few years later, the design by Oswald Mathias Ungers was awarded the first prize in an architectural competition. A managing director of JSK was represented in the jury.

Worth knowing: The design of the Campanile by Hiegel included a pyramid on the roof, which was to become the model for the pyramid roof of Frankfurt’s MesseTurm years later.

The Campanile construction project was controversial because the neighboring Gutleutviertel district feared displacement of the resident population and an increase in car traffic. Nevertheless, the City of Frankfurt granted a first partial building permit for Campanile on March 12, 1989 – just 48 hours before the local elections, which meant the loss of government power for CDU (conservative party) and a coalition of SPD (social democrats) and Greens.

While the SPD supported Campanile, the Greens basically rejected the tower. Finally, a legal error in the partial building permit brought the whole project to the ground: a clause made the legal validity of the permit dependent on the approval of all neighboring property owners affected by the neighborhood law. While the other neighbors could also be calmed down by paying them substantial financial assurances, the real estate group Fay, the developer of Campanile at that time, and the design by JSK met with considerable resistance from one single neighbor. Even offers of millions of euros did not dissuade the doctoral activist from refusing her consent and taking legal action against the construction project in order to delay the gentrification of her district. Although the relevant clause was later declared ineffective in court because it effectively represented a transfer of competence for the granting of building permits from the city to the neighboring property, the Campanile project had long since failed and the red-green city government had not failed politically either wanted more.

The builders did everything legally and commercially to position the project positively in the population and in politics. But none of it helped: the Campanile tower was never built.

A little bit odd: By participating in a postcard campaign, citizens of Frankfurt could express their sympathy for the high-rise project.

Back on the Planning Board

The city planner Jochem Jourdan and his office Jourdan Müller PAS were commissioned by the City of Frankfurt in 2005 to update the high-rise development plan. Among the locations that Jourdan recommended as suitable for high-rise projects, the Campanile area at the main train station was also in a first presentation in March 2007.

At the time, Jourdan proposed a 180-meter (590 feet) tower that was to be moved to the northern corner of the property on Mannheimer Strasse. In the southern part, an urgently needed long-distance bus station was proposed for the site. This proposal and other locations caused controversial and lengthy discussions in the black-green coalition (CDU/Greens). A decision on the new high-rise master plan was postponed several times. In April 2008 it became known that the coalition of CDU and Greens had agreed on the high-rise building at the main train station: the height was limited to only 100 meters and the construction of a long-distance bus station became mandatory prerequisite for high-rise construction. Only a few months later, in September 2008, this agreement was out of date again. It became known that the city had agreed with the property owner Vivico Real Estate GmbH, which had belonged to the Austrian real estate company CA Immo AG since December 2007, on a high-rise building with a maximum height of 210 meters (689 feet). The allowance of a building twice as high was the interest of Deutsche Bahn (the German national railway operator) to rent the tower completely and to concentrate around 3,000 employees from Frankfurt in one place there. Another allowance by the City of Frankfurt for the expansion of the height was the obligation to construct a long-distance bus station on the site and new apartments, especially subsidized social housing. A development plan procedure was intended to be initiated when Vivico (now CA Immo Germany) had signed the lease with Deutsche Bahn.

In March 2009, Deutsche Bahn announced that it had long-term leases from the Commerzbank‘s Silver Tower in the Bahnhofsviertel for around 2,000 employees. The high-rise has been empty since Dresdner Bank (which merged with Commerzbank earlier) employees moved out and was extensively renovated from the beginning of 2009. In April 2012, the employees of DB Systel, a subsidiary of Deutsche Bahn, moved into their new jobs.

By 2018, an eight-storey InterCity Hotel had been built on the northern part of the property on Mannheimer Strasse instead of the planned train tower, and the last proposed long-distance bus station on the southern part in 2007. The temporary parking garage next to the 4-star hotel is to be replaced by an office tower in a few years.

The current situation south of the main train station. There is currently a temporary parking garage (marked in red) on the site for a new high-rise building, which will be demolished as soon as the high-rise planning becomes more specific.